The fun continued on the second day of the Cool Japan Festival 2015 hed on the 7th and 8th of November 2015, at the at the Activity Center of Trinoma in Quezon City! Cool Japan Festival 2015 Day 2 featured more performances by AKB48’s Team 8, traditional Japanese drum troupe Tokoro Taiko, Japanese-style Filipino idol group Kawaii5, and the surprise hit of the event — up-and-coming Japanese idol group Akishibu Project! 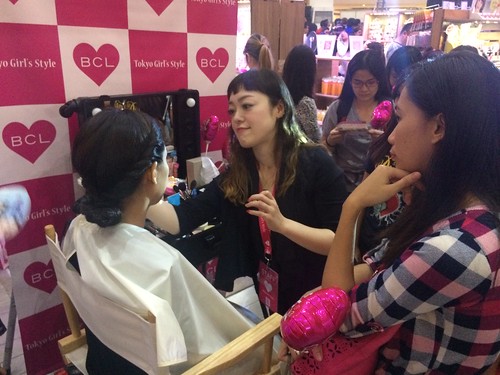 Cool Japan Festival 2015 was put together mainly to celebrate the launch of Japan specialty store Cool Japan Shop, which featured the best of Japanese design and quality with an array of household goods, skin care products, cosmetics, and other goods. Some of our favorites were the BCL Cosmetics Peach Skin Exfoliating Gel, the argan and honey shampoo and conditioner set, and hot cleansing pack that heats up and opens your pores as it cleans — all at a whopping 30%, 50%, and 75% off (we’re girls, of course we love to shop)!

Cool Japan Festival 2015 featured the first Philippine performances for Japanese traditional drum troupe Tokoro Taiko, who brought a festive sounds to the events yatai-style food booths — including takoyaki, okonomiyaki, kaki-goori, matcha-flavored drinks, and Japanese-style popcorn. That’s not all — there were also game and activity booths aplenty, including the much-anticipated lottery for tickets to the stage area for Akishibu Project and AKB48’s Team 8 performance.

Speaking of Akishibu Project, Cool Japan Fiesta 2015 has done wonders for its fan base. Their last two set on the second day of the con were greeted with roars of enthusiasm from their new Filipino fans. The group also managed to sell out the CDs they had brought with them for their special signing event. We are definitely hoping that things keep looking up for the new idol group.

One of the most exciting things we’ve experienced at the event was a group interview with the lovely ladies of AKB48 Team 8. The girls took questions from the press and new media affiliates in a round-robin fashion, giving each one a chance to answer. All twelve ladies in attendance were honest and witty with their questions, and were clearly supportive of each other as any good team should.

The last two performance sets from AKB48’s Team 8 were bittersweet for its fans — they were wildly enthusiastic as always, but they also knew that it would be the last they would be seeing of the group for a good long while. But that’s all right because the devotion of the Philippine AKB48 fans was rewarded by a rare encore performance, with the girls singing the hit single Oogoe Diamond.

Overall, the event was a resounding success. If there’s anything unflattering we could say, it’s that it was too successful! The sheer number of booths and exhibits crowded into the tight quarters of the Trinoma Activity Center was astounding, as was the nearly two hour wait for fans to enter the free event. As a new player on the scene HalloHallo ma have underestimated the response of the local market to their event, and we hope these issues can be easily remedied by the organizers in the next run.

We hope to see everyone again at Cool Japan Expo 2016!