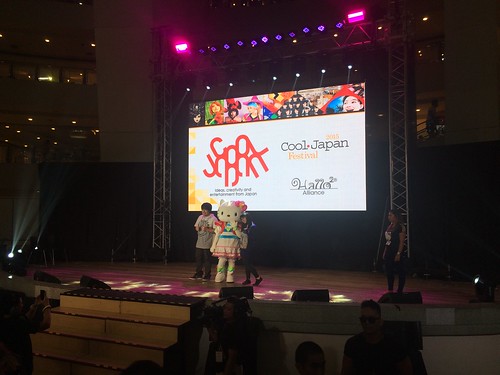 Cool Japan Festival 2015 also featured an array of exhibitions and experiences, including teamlab’s “Sketch Aquarium”, authentic sushi-making fun with the “Nigiri Experience”, and popular NHK TV Drama series of “Amachan”. The event also marked the launch of Japan specialty store Cool Japan Shop, which featured the best of Japanese design and quality with an array of household goods, skin care products, cosmetics, and other goods.

This event is the first on the Philippines for Japanese traditional drum troupe Tokoro Taiko, whose performance was both stirring and memorable — especially to those who have never seen taiko before. On the other hand, Cool Japan Festival 2015 is Kawaii5’s second major outing after Cosplay Mania 2015, and the group brought their unique combination of Japanese kawaii style and Filipino sense of humour to excite the crowd (and maybe do a little matchmaking on the side).

However the surprise of the afternoon was new Japanese idol group Akishibu Project — who performed with top cosplayer Alodia Gosiengfiao, and brought their fresh perspective on pop idols to the delight of their new-found fans. Originally conceptualized as a group that bridged the male-orientated culture of “Electric Town” Akihabara and the female-orientated culture of fashionable Shibuya, the group has been together for only a little over a year, and have a major launch scheduled in Japan for March 2016.

Of course, the highlight of the afternoon were the two explosive sets by Japanese pop idol sensation AKB48’s Team 8 — their first performances in the Philippines. Composed of girls scouted from all forty seven prefectures in Japan, AKB48’s Team 8 is different from all their sister groups as it is a touring group with no permanent theatre. Rather, Team 8 travels the world bringing joy and smiles to their countless fans. Judging by the fervent screams of fans both inside the stage area and outside in the main mall, HalloHallo has scored a majored coup in bringing the girls to Manila.