Manga by the Bard is a Shakespeare and manga workshop featuring Shakespeare and manga specialist Dr. Yukari Yoshihara, and manga artists Sanazaki Harumo, Tintin Pantoja, Ace Vitangcol, and Jed Siroy. It will be hosted by the UP Department of English and Comparative Literature (DECL) on Saturday, 19 September 2015, 4-7 pm, at Puzzles Board Game Lounge, Bonifacio Global City, Taguig. 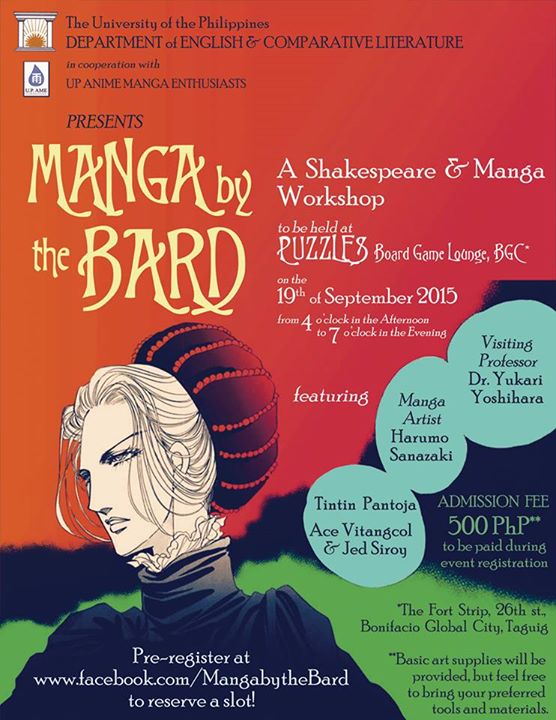 Sanazaki Harumo (真崎春望) is one of the most prolific Japanese manga artists, with more than 300 manga books published by several publishers. She made her debut as a shoujo manga (girls’ comics) artist from Akita Publishing in 1981, and has worked extensively for several leading publishers, creating romance, mystery, horror and historical fantasy manga.

Her works include Angel Wars (エンジェル ウォーズ), Maihime Shichihenge (舞姫七変化; Quick Changes of a Dancing Girl), Tenshi no Ryouriban (天使の料理番; An Angel’s Chef), Abe no Seimei (安倍晴明), and Asakusa Yangu Youhinten (浅草ヤング妖品店; Young Shop of Mysterious Goods in Asakusa). She has also created manga based on films, operas, romance novels and stage plays. Sanazaki has had active interests in Shakespeare’s plays, and has so far created manga adaptations of Macbeth, Romeo and Juliet, and A Midsummer Night’s Dream.

Ace Vitangcol and Jed Siroy have both worked on the romantic comedy manga series, Love is in the Bag. Tintin Pantoja’s works include Who is AC? and Hamlet: The Manga Edition.

The admission fee is PhP 500, which can be paid during registration at the event. Kindly follow this link to pre-register.