Cosplay Mania 14 ups the ante with a special pre-event prior to the main festivities! Join Japanese cosplayers Touya Hibiki and Yun Kousaka at their first ever Philippine event, Cosplay Mania 14 Meet and Greet Madness! The Meet and Greet Madness is on 13th September 2014 at the SMX Aura Meeting Room 1, SM Aura Premiere, Bonifacio Global City. Tickets are priced at Php700 each and there are two available sessions. 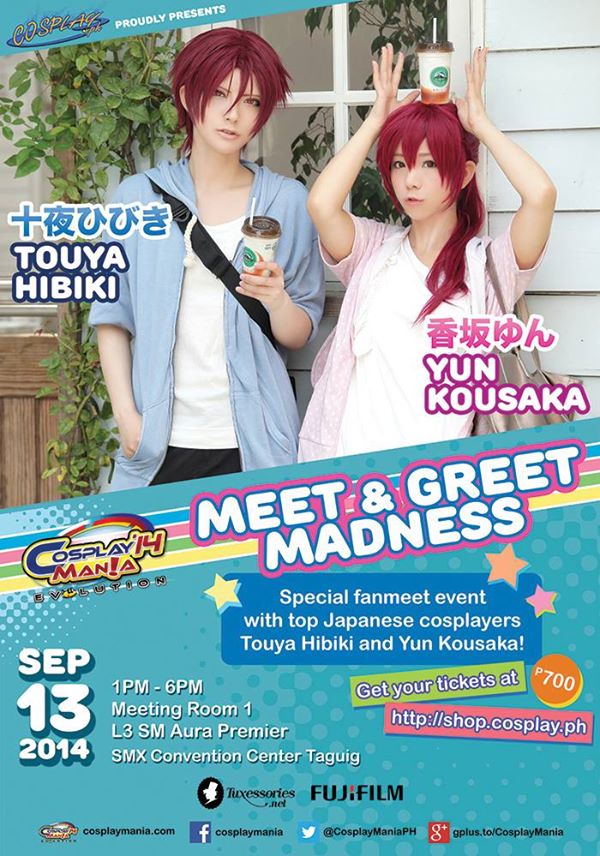 Fans of much beloved sports anime Free! also get a very special treat! The second session is a special Free! Fan Gathering — come in costume, hang out with fellow Free! fans, ask our guests Free!-related questions, and enjoy so much more Free!-lings and em-oceans!

Yun Kousaka had been cosplaying for close to a decade, and she has been a guest in several notable conventions including the Singapore Toy, Game, and Comics Convention. Known for her bubbly personality and charm, Yun has cosplayed many characters from different series like Vocaloid, Love Live School Idol Project, and Macross Frontier.

Touya Hibiki has also been cosplaying for a decade, and has accompanied Yun in conventions outside Japan like the STGCC. Known for amazingly handsome cosplays from anime like Kuroko no Basketball, Uta no Prince-sama, Haikyuu, and Free, Touya thinks that cosplay is a way to express her fondness for anime and manga.

Tickets are still available for Cosplay Mania 14 Meet and Greet Madness,so make sure to register for yours today!