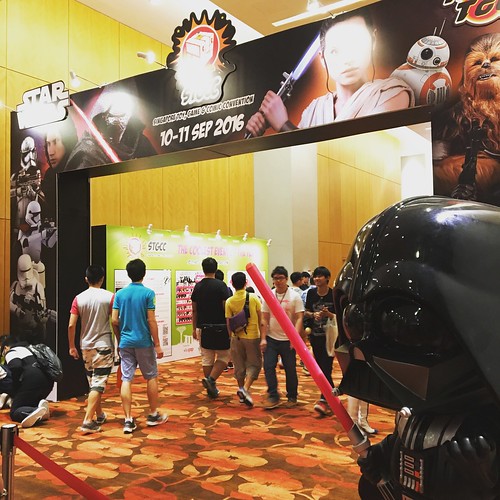 In a bid to remain fresh and appeal to an even wider array of fans and enthusiasts, STGCC has relocated to a new floor at the Sands Expo and Convention Centre, and tweaked the layout for an even bigger artist alley and signing area. There was also a massive gaming arena that hosted the first ever Mountain Dew Cup for avid Overwatch players.

Although the con was loads of fun for us (what with scoring signatures from both Haruhiko Mikimoto and Simone Legno!), we did hear a lot of concerns from artists and circles who participated in the artist alley that the turn out this year was not as good as the previous year’s — which meant that a lot of them went home in the red.

And while nobody expects to set up a table at a con and make a high profit from it, perhaps the fine folks at Reed Pop consider freezing or even lowering the rates on table rentals? It would do a lot to encourage local talent to create art and produce merchandise for fellow fans — and who knows, maybe catch the eye of a scout or licensor as well?

With the 10th anniversary of STGCC coming up next year, we hope that things improve s we can all expect the best STGCC yet! See you guys again next year!