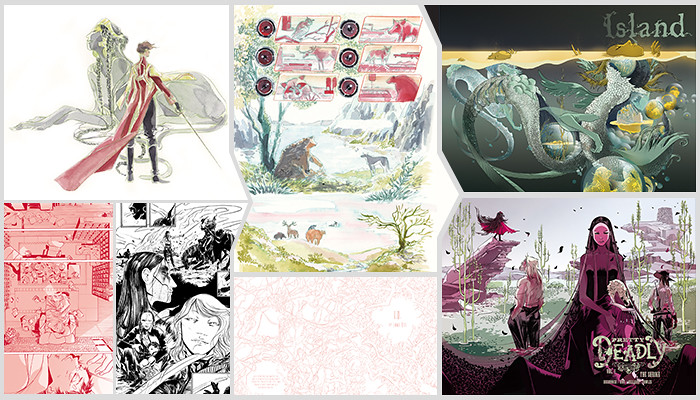 Emma took a couple of minutes off from her daily routine to answer a few questions about her art, how she got started in the business, and some advice from the heart for fellow artists.

I feel like I’ve been drawing comics since forever, but never thought it could be a real profession to me because in Spain, while there is a really nice scene, the industry is not yet developed enough for an artist to make her/his living from it.

I studied architecture and my plans were basically working as an architect and keep doing comics on my own far from being professional, until I realized my work seemed to work pretty nicely for big markets, like the American one. I remember having a couple of interviews with editors but, like everybody in this business, even if my feedback was amazing it took a while, and some luck too, to finally make it. I owe Mark Waid specially, who was the one that asked for me to work in Strange, my first real gig at Marvel; this helped me a lot in terms of starting from a really nice position, without many proofs and fill ins.

My mother is an art teacher, so I grew up pretty connected to painting and art in general since I was very little. Picasso, Goya, Monet, Buonarrotti, Rodin… Going to museums since I was a little child educated me a lot in terms of aesthetic sensibility, I think.

It’s always difficult to talk about favorite cartoonist and influences. In my case it depends a lot on the projects I’m doing.

I remember paying a lot of attention to Gene Colan and other classics like John Buscema, specially when I was working on superheroes. Hiroaki Samura taught me a lot about how to depict action on pages and his work in Blade of Immortal is a big influence for Pretty Deadly, alongside with classic manga like Lone Wolf and Cub by Kazuo Koike and Goseki Kojima, or other works by Shirato Sampei. My friend Brandon Graham actually calls Pretty Deadly spaghetti manga.

I think that Katsuhiro Otomo (Editor’s Note: OMGOMGOMG!!!) was the creator who made me think about how much of a dream would be drawing comics forever. And my favorite cartoonists today are Taiyo Matsumoto and Daisuke Igarashii.

Cinema influences me a lot, too: Sergio Leone, Kurosawa or Tarkovski among others. Also books: Le Guin and Stanislav Lem are huge influences for Mirror for example.

Videogames too, I’m specially in love with Bloodborne and the Dark Souls series, also with old JRPGs from the nineties, as well as more recent jewels like Gone Home or The Last of Us.

I’m going to say Stephen Strange, basically because I have been in love with Steve Ditko my whole life and because it was probably the one I drew the most during my time there. Also he’s a cretin ha ha, which makes him very human and interesting to develop as a character.

What was the most surprising thing you experienced while working with Kelly Sue DeConnick?

I love how connected we are while working and how hard we try to surprise each other one page at a time. Kel is amazing and she is, and will be, an inspiration for life. We became best friends through doing comics we love with a lot of freedom to express ourselves, and this, I assure you, it’s a really nice way to get to know somebody.

I always recommend to be true to oneself, to be honest with the work you’re doing and, more than anything, to never forget to have fun with it no matter what. Don´t do what you others expect you to do, do what makes you happy as a creator.

Women in comics still have a lot of bothersome things to deal with, but there are a lot of us already and we’re becoming more and more everyday. I recommend to support each other, to participate in collectives and associations and to remember comics is a wonderful language everybody can appropriate.

Get to meet Emma Rios at STGCC 2016 — slated to take place from 10th to 11th September when Singapore Toy, Game & Comic Convention (STGCC) takes centre stage at the Sands Expo and Convention Centre, Level B2, Halls E and F. Tickets are priced at SGD19 for a one day pass and SGD28 for a two day pass. Click here for more VIP package details.