Hwei Lim draws comics – the Boris & Lalage short stories—which are part of the collaborative fantasy comic, Spera,—and the sci-fi/fantasy series, Mirror, written by the Big Boss, Emma Rios. Hwei also draws illustrations for children and young adult books such as Spirit of the Sea and Dragonhearted. 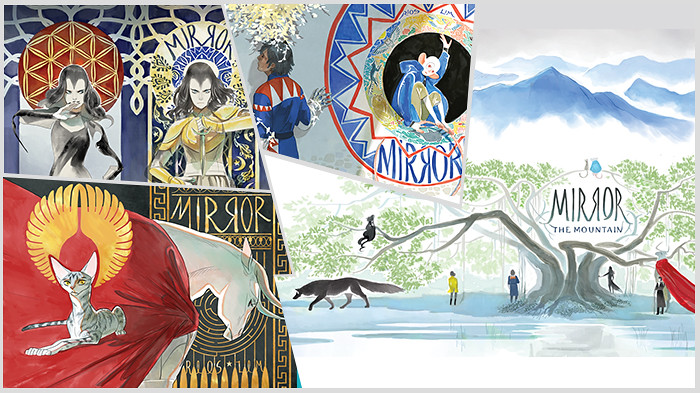 Hwei took a break from her busy schedule to answer a few questions about her work, what it’s like working with Emma Rios, and some advice for fellow artists starting out in the business.

Very gradually, with patience, with luck. I posted my art online and sold my selfpublished comics at conventions, and through these I’ve met many people who work in or for comics and illustration, in person and online. I met Emma Rios at a workshop some years ago where we worked on a short comic together, and we wanted to work on a comic together again but never managed to (schedules, timing, etc) until the opportunity to pitch Mirror came up.

Too many to name! I like Liu Jiyou’s animal paintings a lot, incredibly lifelike and expressive drawings done in traditional Chinese painting style. Zao Dao draws the craziest, wildest fantasy characters and scenes. Taiyou Matsumoto drew some of my favorite comics of all time (Sunny, Takemitsuzamurai). I’m also definitely influenced
these days by the games I play Dark Souls has an incredible storytelling mechanic, and Monster Hunter is so colourful and cute and majestic all at once. I’ve been trying to draw really good looking monsters ever since.

Among the characters you have worked on, who was your favourite and why?

Ohhh this is tough, this is probably a tie between Aldebaran the minotaur, and Elena the Chancellor of the colony. Early on I didn’t think too much about every single character, but as drawing progressed we needed to think about how they would stand, walk, move, react to events…

I think we probably spent the most time with these two, figuring them out and kind of getting to know them, so I feel most fond of them. Aldebaran is fun to draw, whether he’s being majestic and intimidating, or sad and
poetic; and I really enjoyed drawing Elena in all her heroic and battleweary scenes. But from an extremely shallow perspective, Phinx the cat is my favorite, because she’s a cat.

What was the most surprising thing you experienced when working on comics, as opposed to working on illustrations for young adult fiction?

And as the story gets longer you have more and more to remember, to follow up, to resolve. I feel like
this was more intense because our roles in creating Mirror overlapped a lot writer and coartist (Emma), artist and cowriter (me), and both of us on the environmental and character design & development team. I felt I had so much creative freedom and also more responsibility for the outcome.

Draw it, put it out there, always have your email / contact details visible, and don’t sell yourself short — look up the rates for the kind of art you’re doing, and work for clients who value what you do.

Get to meet Hwei Lim at STGCC 2016 — slated to take place from 10th to 11th September when Singapore Toy, Game & Comic Convention (STGCC) takes centre stage at the Sands Expo and Convention Centre, Level B2, Halls E and F. Tickets are priced at SGD19 for a one day pass and SGD28 for a two day pass. Click here for more VIP package details.