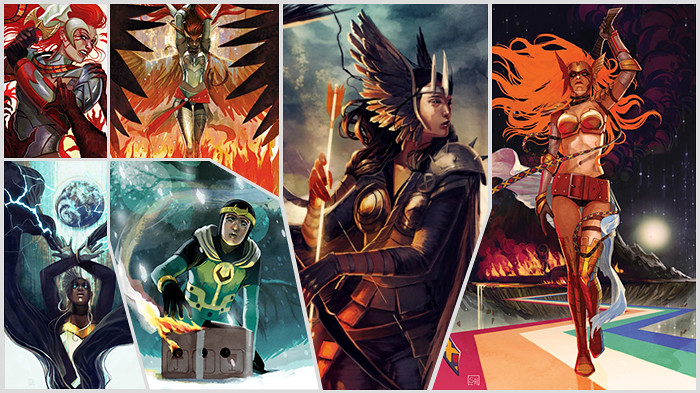 Stephanie’s ethereal style refers often to classical and traditional painting. She’s been working on covers for Storm, Journey into Mystery, Angela, Thor, Black Widow, Guardians of the Galaxy, and many more. As an interior artist, she painted pages for Inhumanity: Superior Spider-Man, Ant-Man & the Wasp, Fearless Defenders, Angela: Asgard’s Assassin, Angela: Queen of Hel, Witch Hunter Angela, and The Wicked + The Divine.

Stephanie took a couple of minutes off from her busy schedule to answer a few questions about her art, how she got started in the business, and some advice from the heart for fellow artists.

I Started as a comic book artist for the French market around 2004. I didn’t really know what kind of illustrator I wanted to be at the moment. I just was looking for work. I stumbled on my first editor in a children book fair in Paris and submitted him a few stories I had written. But being in the same time writer and artist was a lot of pressure and I switched to cover art after a call from Hachette Publishing.

I did a lot of covers for the young adult literature industry. It suited me more because I still had a lot of things to learn as an artist (and still do) and I could put all my efforts and focus on one single picture.
After a while, I had the chance to offer my work to Marvel’s talent scout: CB Cebulski — thanks to Olivier Jalabert, and he saw potential in it. He gave me my first gig 2 years later, and since then, I have been a mainstream comic book artist.

I think it will always be Loki. Most precisely Kid Loki but I have a soft spot for him in every shape and age.
Journey into mystery was my first regular job for Marvel and I remember this period with a real fondness. It was a title without pressure for a long time. I didn’t have a lot of other jobs, so I had all the time to challenge myself, we worked really as a team and this created links that still shape my career since I still collaborate regularly with Kieron Gillen.

But really, it was the readers that made the title special. They felt in love with the character and so did I, through their eyes. For the last issue I set up a meet up with the cosplayers at NYCC where I offered them silk prints. The editors came, as well as Kieron. It was a very beautiful, bittersweet moment.

What was the most surprising thing you experienced while working with comics, as opposed to traditional art?

My first american Comic con I guess. The exuberance of it, the unleashed expression of candid love. It was so faraway from french conventions.

Maybe don’t think yourself as a female artist. You are an Artist. Be focused, keep working, anything can happen to courageous hearts! More than anything, be authentic. Your singularity will make you shine.

Get to meet Stephanie Hans at STGCC 2016 — slated to take place from 10th to 11th September when Singapore Toy, Game & Comic Convention (STGCC) takes centre stage at the Sands Expo and Convention Centre, Level B2, Halls E and F. Tickets are priced at SGD19 for a one day pass and SGD28 for a two day pass. Click here for more VIP package details.