For 8 years, Cosplay Mania has delivered in the biggest way possible. This year, Cosplay Mania will be held on the 1st and 2nd of October 2016 and covers most of the 2nd Floor of the SMX Convention Center Manila in Pasay City and has something for everyone.

An amazing line-up of contests will also grace the event such as Cosplay Solo Showdown, Cosplay Team Battle, Cosplay Tournament of Champions (TORCH) Finals and the Cosplay Mania Cup 2016! There is also no shortage of Cosplay Guests as Hana and Baozi, Tomia, DD-Tenka, Hiko, Yukari Shimotsuki (former WCS Champion), Ruka, Rumi and Kirisaki join Kaname☆ as one of the most impressive cosplay guest line-ups in Philippine history.

This year, Cosplay Mania will be going into its 9th year, boasting some of the most impressive growth for a local pop culture event. Starting off in 2008 at Megatrade Hall 3 of SM Megamall, it posted an impressive showing of 6,000 attendees for a single day with the allocated 5,000 tickets sold out and an additional 1,000 tickets produced to accommodate the maximum number that the venue could hold. Just last year, the attendance skyrocketed to a mind-boggling 36,000 attendees.

Like Cosplay Carnival and ACX, the event features zones, but grown to epic proportions. There will be a Fan Fair Zone, a huge Lifestyle Zone, a massive Gaming Zone, a sprawling Collectibles Zone, a delicious Meals Zone, but it will also feature a Blockbuster Zone that will feature booths that are nothing short of massive.

This is only the tip of the Cosplay Mania iceberg though as concert guests have yet to be released! Expect Cosplay Mania 2016 to be a truly stand-out event that cannot be missed. 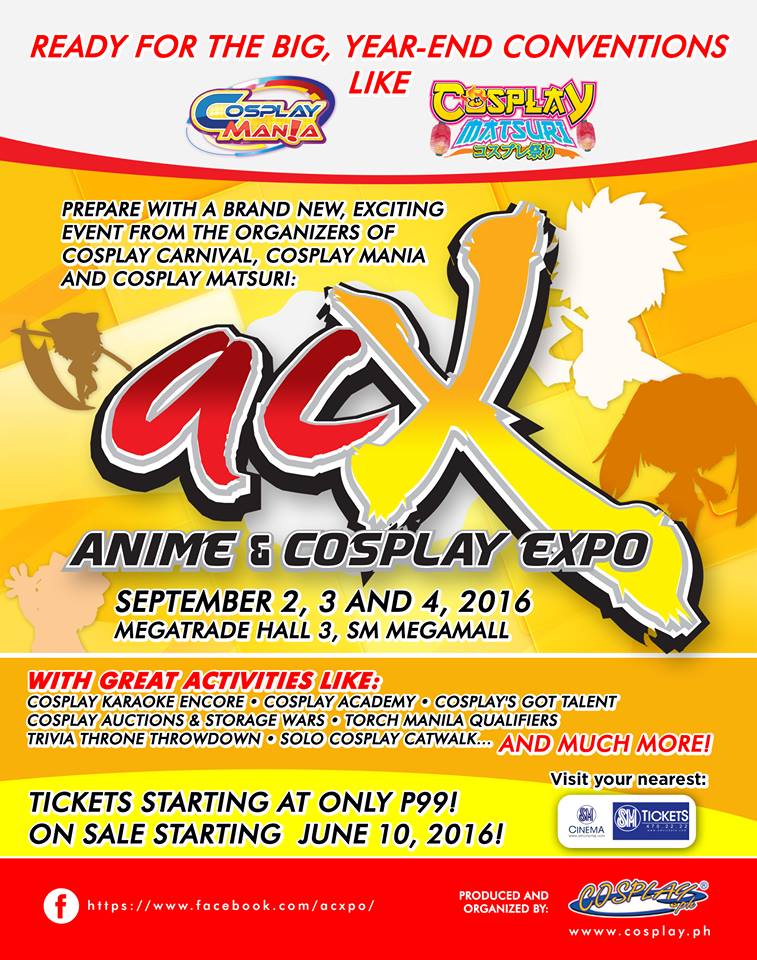 ACX takes its inspiration from Cosplay Mania itself. Located at the very convention hall where Cosplay Mania was born, Megatrade Hall 3 at SM Megamall, the event features some of the highlights of Cosplay Carnival and expounds on them as well as creating a staging ground for Cosplay Mania in October.

Not only will the winner of the Cosplay Karaoke Encore be featured at Cosplay Mania 2016, but they will also be performing in Japan! Plus, the Cosplay’s Got Talent competition will determine the opening acts for the Anisong Concert at Cosplay Mania. Imagine being the front act for huge names from Japan!

Other activities include Cosplay Auctions and Storage Wars, Cosplay Academy with free workshops for makeup, crafting and performance and Trivia Throne Throwdown. There will also be huge cosplay contests like Solo Cosplay Catwalk and TORCH Manila Qualifiers where the winners advance to Cosplay Mania!

All these comes at amazing bargain as the entrance fee is lower than even when Cosplay Mania started in 2008, with an entrance fee of only Php 99! Best of all, you can buy tickets at any SM Tickets outlet at any SM Cinema or SM Dept. Store. 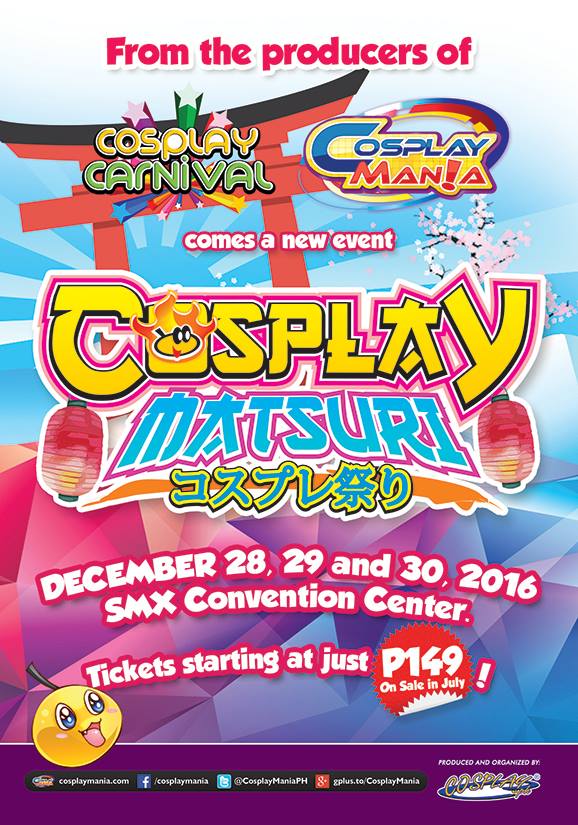 Focused on bringing in the ambiance and culture of Japan to the event, Cosplay Matsuri promises to have activities and contests that aren’t only festive and colorful, but that have the distinctive Japanese feel to Philippine shores. Whether it’s food, atmosphere or just fun, the event will draw out the inner otaku in everyone.

As Cosplay Matsuri is still some ways off, most of the activities and contests are still secret, but rest assured that they will be both creative and have a distinctive Japanese feel.

Like Cosplay Mania, Cosplay Matsuri can be found at the SMX Convention Center Manila in Pasay City. Early Bird tickets are now on sale for only Php 149 at any SM Tickets outlet at any SM Cinema or SM Dept. Store.

Interested in joining these events as a sponsor or exhibitor?

Cosplay.ph or Cosplay Philippines is the premier event organizer for cosplay events in the Philippines. Conceived in 2006 by a group of cosplayers and event staff, Cosplay.ph’s goal has always been to promote cosplay as a healthy and positive activity and to bring cosplayers from all over the world together in a spirit of celebration and collaboration.

Organizing, managing and producing dozens of events throughout the country, Cosplay.ph has established itself as one of the most professional and pioneering event organizers in the country.