A new date has been set for Eir Aoi World Tour 2015 – ROCK THE WORLD! – IN SINGAPORE. Previously slated for 3 October 2015, the new date for the concert is on 9 January 2016. This would be the first time Eir Aoi will be performing her first ever solo live in Singapore. The venue is still at The Coliseum, Hard Rock Hotel Singapore, Resorts World Sentosa. 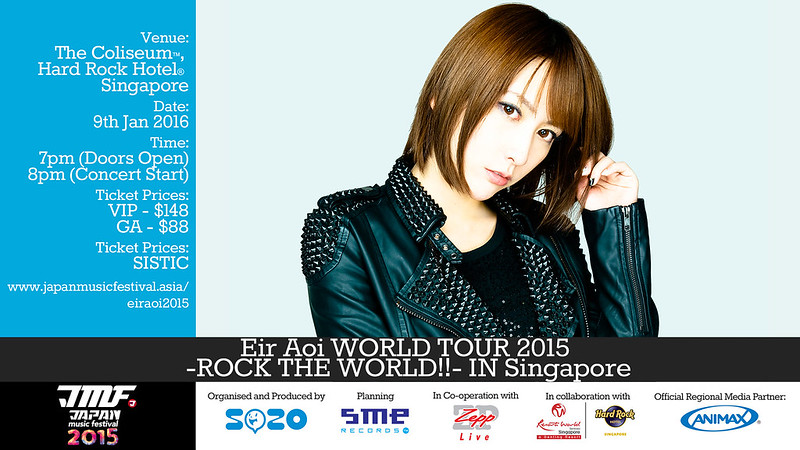 Although Eir Aoi has been to Singapore twice, this will be her first time holding a concert on her own. In light of Eir Aoi’s health, as she just recovered from pneumonia, and due to bad haze conditions in Singapore in October, concert organisers and partners agreed to postpone her solo live to January 2016, where weather conditions would be better.

Ticket holders who are unable to attend the concert on the new date and wish to have their tickets refunded would need to contact SISTIC directly for their refunds. Official merchandise will also be available at the concert venue. Sales of merchandise will begin at 5pm on Saturday. All items are cash terms only.

Recent projects by SOZO includes solo concerts for J-Pop artistes such as Kyary Pamyu Pamyu, May’n, RADWIMPS, Mega-events like Miku Expo in Jakarta and many more. In 2014, SOZO moved forward with a capital alliance with one of Japan’s largest talent management company Horipro. For more information about SOZO, visit: www.sozo.sg

JMF’s mission is to celebrate Japanese Music by engaging fans in SE Asia and beyond, with the best
and latest in Japanese Music Concert Experience – direct from Japan. 2014 marked the start of the JMF (Japan Music Festival) platform, created and owned by SOZO to bring the best in J-Pop, J-Rock and more as a series of solo concerts under a single brand.

In 2015, JMF will return to engage ever more concert attendees in the South East Asian region. Artistes that will be having their solo concerts under the JMF umbrella will be announced in the near future. Find out more via http://japanmusicfestival.asia/