Day 2 for Animax Carnival Philippines 2015 drew an even bigger crowd than the previous day’s festivities! Held over the course of the weekend of the 30th and 31st May 2015, the Philippine edition of the South East Asian event was held at the Hall 4 of the SMX Convention Center Manila in Pasay City. 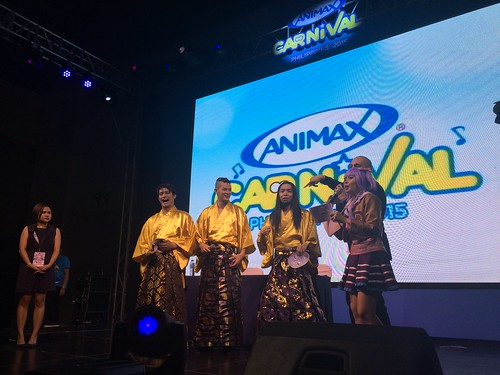 The main event for the day was the Animax Carnival Philippines 2015 Group Cosplay Competition, which featured four groups of competitors representing four major shows on the Animax slate: Naruto, BLEACH, Hunter x Hunter, and Fairy Tale. Competing for over PhP 50,000 worth of cash and prizes, the contest was won was the Fairy Tale group — whose team members included the winner of the previous day’s Solo Category winner Tantin Meneses.

What’s a carnival without onstage performances? Animax mascot OO-KUN shimmied and shook for the audience, while osplayer and artist Alodia performed her Japanese single “Kawaii Girls” to the delight of her fans. But without a doubt, the main stage was owned by Japanese dance crew and Asia’s Got Talent finalists TRIQSTAR! They performed a thrilling dance set that was a combination of kabuki, street, and hiphop — bringing the crowd to its feet.

Responding favorably to the Philippine crowd’s energy, TRIQSTAR also did a quick onstage dance workshop, and finally held a meet and greet with several lucky fans. With the Manila audience’s warm reception and their genuine joy to see the group up close, TRIQSTAR has expressed an eagerness to return to the country and perform once again (local con organizers, take note!).

The word “corporate event” has taken on a somewhat unsavory connotation over the years, but thanks to Animax Carnival Philippines 2015 that negative image has been dispelled completely. Yes, it is possible to hold an event where everyone wins. And we should encourage that kind of gung-ho spirit by supporting the channel and their shows.

If there was one thing we would recommend to the channel to improve for the event, it’s to announce it earlier than one month in advance ^^;; The eleventh-hour announcement threw a lot of people out for a loop, and they were unable to attend due to scheduling differences. It was a crying shame too, as they missed what was one of the most unexpectedly awesome cons in recent memory.

Thanks Animax, and see you and OO-KUN again next year ❤

magnetic-rose.net is an Official Media Partner of Animax Carnival Philippines 2015.