2015 Ozine Fest took place last weekend from the 24th to the 26th of April 2015 at the Megatrade Halls 1, 2, & 3 and Function Rooms A & B of the SM Megamall in Mandaluyong City. The event features an extensive list of international cosplay talents as special guests, as well as a Horror Booth Area, a Japanese Matsuri Area, an Artist Area, Console Game Tournaments, Anime TCG Tournaments, Anime Figure Exhibits, and the 2015 Gundam Caravan. 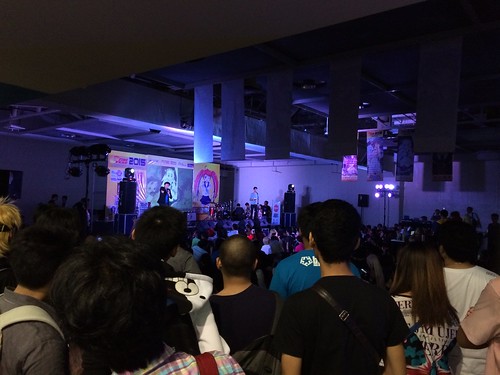 Inside the hall you can find several rows of local merchants, distributors, independent producers, and doujinshi circles (including two of our blog partners Hubbyte Toy Store and Perkee) offering everything from custom-printed phone cases to reversible dakimakura sets. The stage events on the other hand featured local band and group performances, product launches (including the much anticipated Philippine release of the Attack on Titan manga), and the famous (infamous?) Ozine auctions.

The changes have a dramatic effect on the heat, noise, and access problems from previous cons, and we support this new policy wholeheartedly.

Although the event is much improved compared to its previous incarnations, there is is still room for improvement. The layout of the Merchants area in particular needs some tweaking, as the alleys between the booths is far too narrow for the kind of crowd the event draws. This is in contrast with the massive open areas on either end of the Merchants areas which were used as hang-out spots by many cosplayers. Perhaps if the Merchants were spaced further apart to take advantage of the open areas then there would be less overcrowding in critical areas.

Another concern — although this was not the organizers’ fault, was the failure of over half their marquee guests to appear at the event. An unlucky combination of scheduling conflicts and visa/passport issues prevented DMYO, Luffy and Tsubasa, and other guests from attending the event. To their credit, the Ozine Team did their absolute best in refunding and/or compensating VIP Passholders who were stiffed by the no-shows. The lesson that everybody learned from this is that when it comes to guest lists, bigger is not necessarily better.

Thanks again to everyone at Ozine Fest 2015, and we wish you luck in your future events!