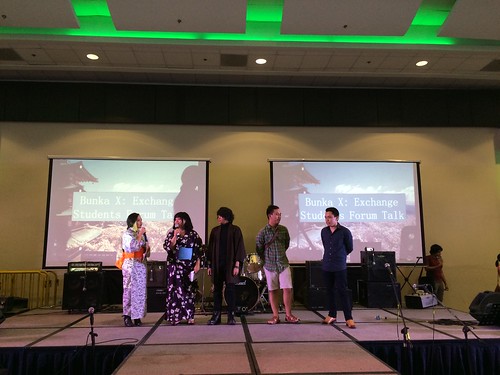 One of these talks was an insightful and engaging lecture by Dr. Benjamin San Jose on The Shojo in Japanese Popular Culture. Subtitled “Hayao Miyazaki and its Resonance to the Philippine Social Experience”, the lecture provided a brief glimpse into the unique style by which Ghibli creates its iconic heroines, as well as its influences in modern Japanese Manga and Anime. Dr. San Jose also touched upon the topic of the universality of Ghibli heroines, and how Filipinas who watch these films are able to relate with these characters.

Another eyeopening talk at the con was a panel discussion on what it takes to be a Filipino scholar in Japan. Dubbed “Bunka X”, the panel of university undergraduates and former scholars to Japan shared their experiences in Japan, as well as gave tips on how to go about getting a scholarship grant for the Land of the Rising Sun. As former scholars to Japan ourselves, we highly encourage everyone — especially young people in high school and college, to give it a shot. We guarantee it’s one of the best experiences of your lifetime!

Continuing the trend of anime lectures and Japan topics, we gave a brief talk on what it takes to secure a Japanese visa and travel to Japan. Having discussed the topic at length here at the blog, we tried to encourage people to not be afraid of lodging a visa application and finally flying to Japan. Our top three tips? 1) Make sure your documents are complete; 2) make sure your finances are in order; and 3) makes sure you establish a history of travel before lodging your first application. Who knows — it may be your turn to go to Japan next time!

Featuring a slew of other activities such as traditional Japanese matsuri booths (there were not one but two omikuji stalls — one of them was ours!), toy displays, figure dealers, fan merchandise, apparel, and doujinshi circles, Tamashii Convention was a well-rounded event that had a little something for everyone. We also applaud the No Ticket, No Entry system that the convention implemented with the help of SMX Convention Center, which meant that the crowds were under control and everyone had room to breath. Clearly one of the better collegiate events we’ve been to ever, we’re already looking forward to their next event in 2016!