Let’s face it — when it comes to Japanese food, I am a bit of a snob. It comes with the territory I guess, having lived there on and off through the years. So when a new Japanese restaurant opens up in Manila, I almost inevitably fall into one of two camps — I either love it because it really tastes like Japan and keep coming back, or hate it because it’s too “localised” and never return ever again. I am even worse when it comes to Japanese buffets — as I have associated many of them with large amounts of mediocre food to be had at premium prices. 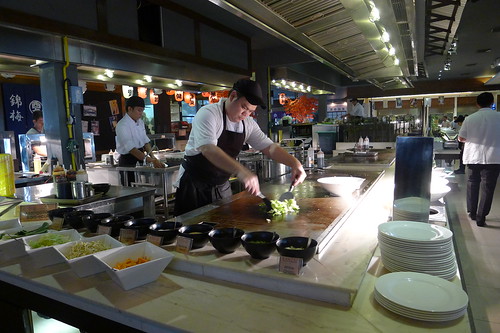 Fortunately, Marvin Agustin and the team at Banzai: The Great Teppanyaki Theater are trying to change that — not just for me, but also the thousands of picky eaters all over the metro. Their vast location at SM By The Bay at the Mall of Asia complex reflects the expanse of their Japanese-only menu. From their signature teppanyaki and okonomiyaki, all they way to their tempura plates and sushi selections, there is something for everyone who loves Japanese food.

Since teppanyaki is the highlight of their menu, of course they have a mind-boggling array of teppan dishes on offer. Our favorites are the misono beef tips and the salmon teppan — the beef is tender and savory, while the fish tastes really fresh and pairs well with cold beer. Other highlights of the menu include their shouyu ramen, whose broth can be compared to specialty ramen joints, and the yakisoba which tastes just like the ones you get at street food stalls in Osaka (needs more Kewpie mayo though — but that’s just us because we love Kewpie mayo!).

They even have a special presentation every day at 12:00 NN and again a 8:00 PM, showcasing the theatrical skills of Banzai’s teppanyaki chefs — much like they do in Osaka’s Dotonburi district or even the Benihana chain in the United States. They are accompanied by performers dressed in period Japanese costumes, who gamely pose for photos with guests when their dance number is over. And if that’s not enough, they also have a trick photo gallery and free costume rentals, so you can really get into some sumo-sized fun!

I think the best thing about Banzai is that it preserves just the right amount of authenticity, and then adds the appropriate dash of localisation and modernity to keep it from being too austere and inaccessible. It is not as intimidating as an authentic kaisen ryouri meal, and at the same time tries not to descend into eat-all-you-can madness. It is definitely a lot of kitschy fun and great food, and I can imagine myself coming back again and again.

Thanks very much to Marvin and Kate of Banzai: The Great Teppanyaki Theater for having us!