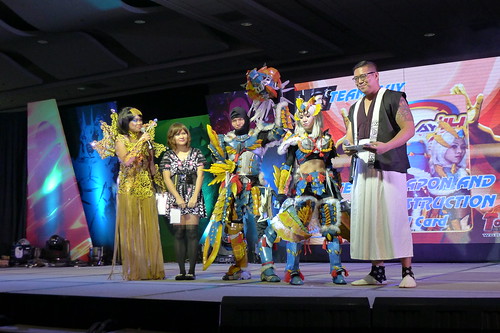 Cosplay Mania is also supported by venue partners SMX ConventioncCenter and SM Supermalls Cyberzone, corporate partners All Nippon Airways and YKL Fujifilm, beauty partners Gatsby, Bifesta, Pixy, and Majolica Majorca, and cultural partners the Department of Foreign Affairs and the Japan Information and Culture Center of the Embassy of Japan.

We spent most of the afternoon in Hall 4, taking advantage of the last day of sales for the exhibitors and sellers. We felt extremely lucky for being approached by many brands at the con, offering sample merchandise and items to give away at the blog (stay tuned for that really soon). We received piles of styling and grooming aids from Gatbsy, a set of Iron Man Nendroids and Danboard phone straps from Hubbyte Toy Store, as well as premium items and even Deleter professional manga pens from Great Toys Online.

The highlight of the afternoon, competition-wise, was the 2015 edition of the Cosplay Tournament of Champions, the Philippine finals for Anime Festival Asia’s Regional Cosplay Championships. Third time appears to be the charm though for Team Kanor Cubes, as their team members finally snagged the title of Cosplay Tournament of Champions Grand Winners. Having qualified as finalists in previous years, they finally brought home the bacon with a three-costume quick-change performance featuring 90s cult hit BEAT X.

After the intense competition, it was JAM Concert time again — this team featuring a fabulous back-to-back set featuring Aya Ikeda and Loverin Tamburin. Ikeda-san sang a fun and energetic medley of her Pretty Cure hits — Heartcatch Precure!, Smile Precure, and Suite Precure. Loverin Tamburin, on the other hand, once again rocked the audience with their Disgaea tracks, we well as a cover of the Rurouni Kenshin hit 1/3 Junjou na Kanjou.

Cosplay Mania 14 Evolution was another resounding success. I think my only concern with the event is that will the local community continue to come to the event every time they ramp up the activities (and the ticket prices). From a business perspective, its understandable that they raise ticket prices to compensate for the better events and increased expenditures, but hopefully they won’t burst the bubble and alienate the people who have supported them through the years.

As usual, we are looking forward to bigger and better thing from Cosplay Mania in the years ahead. They have already announced that the 2015 edition of the convention will encompass all five Function Rooms at the SMX Manila, as well as hinted at bigger acts in upcoming JAM Concerts. Better start saving up, guys — and see you again next year!