Cosplay Mania 14 is back this year in cooperation with Magic The Gathering, Brother International Philippines Corporation, and ANIMAX! Held on the 4th and 5th of October 2014 at the SMX Convention Center Function Rooms 3 to 5, SM Mall of Asia Complex, Pasay City, it has evolved to offer even more exciting activities including the first ever JAM: Japanese Anime Music Concert! 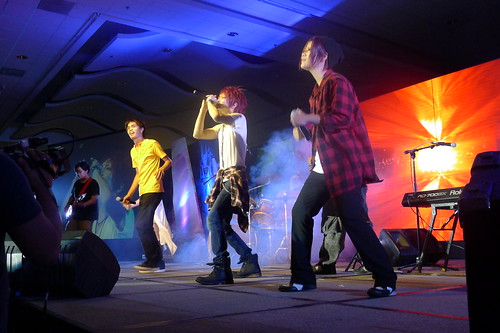 JAM was headlined by Aya Ikeda — the voice behind the theme songs of popular animes such as Heartcatch Precure!, Kindaichi Case Files and the online games “Finding Neverland Online” and “Harezora Monogatari”, and Loverin Tamburin — the band behind the opening theme for the anime Disgaea and the ending theme for Natsuhiro Drops. JAM also featured performances by MOON SPEAK, NINJA TUNA, and cosplay heart throbs REIKA and KANAME.

As with any Cosplay Mania event, one of the highlights is the Dealers Hall in Hall 4. Featuring a mind-boggling array of anime and cosplay-related merchandise, there was a little bit of something for everyone. There were even booths selling Japanese import cosmetics at deeply discounted prices — we really couldn’t resist dropping a wad of cash at the Shiseido-Majolica Majorca and CANMAKE Tokyo booths.

There was also a Hall 4 Cosplay Masquerade competition for cosplayers who chose not to compete in the bigger contests. At Hall 5 on the other hand, the Grand Finals of the Cosplay Solo Showdown was in full swing. Featuring individual cosplay finalists chosen from a field of over 100 applicants, the competition showcased not just costumes but also backgrounds, music, and stage presence. The eventual winners of the competition were:

The highlight of the evening was the first night of the JAM Concert. Featuring a rocking opening set by local J-rock cover band MOONSPEAK, they were joined by cosplay superstars REIKA and KANAME for a special number. When the crowd was ready and pumped, LOVERIN TAMBURIN performed an explosive set featuring their original songs, plus covers of much-beloved anime themes.