The Singapore Toy, Game and Comic Convention (STGCC) was held once again in sunny Singapore on the 6th and 7th of September 2014, with a line-up of top pop culture personalities at the Marina Bay Sands Expo and Convention Center. 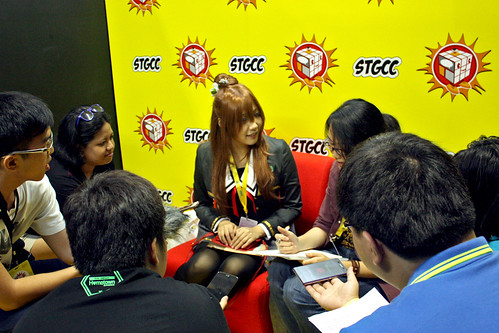 Before the madness started in the main hall, we were lucky enough to sit down with one of the convention’s headlining guests for a few minutes. Shirahane Nao-sensei is a Korean artist and illustrator who lives and works in Japan. She is also known by her artist name DMYO.

Shirahane-sensei is best known for her illustrations for the games Trickster and DJMAX, as well as for the Culture Japan character Suenaga Mirai. STGCC 2014 marks is Shirahane-sensei’s first time in Singapore, and she was quite happy to chat with us about herself and her work.

Originally from South Korea, she grew up loving Japanese titles such as Sailormoon and Ranma 1/2, and that has fueled her passion for manga and anime. Shirahane-sensei then moved to Japan to pursue a career in art and illustration. Her talent and work ethic drew the attention of companies such as Gainax and ASCII, which then led to even more opportunities to draw and illustrate for major Japanese franchises.

However, it’s not all work and no play for this talented young artist. In her spare time, she likes to go to karaoke as well as on sightseeing tours. Lately, she has also taken up cosplay, as many of her friends cosplay as well. She hopes to be able to cosplay as well as promote her art at other events all over the world — including the Philippines.

As the interview wound down and we made our way back into the main halls, we were greeted by a plethora of major booths and artists tables. The Dragon Nest SEA booth was selling an STGCC exclusive Nendroid of Irine, while over at the Bandai booth, they were retailing the Proplica Sailor Moon Rod — a Sailor Moon wand replica that was aimed at adult collectors rather than sold as a child’s toy.

Dominating the skyline was the massive Hot Toys Star Wars booth, which was hosting a tie up event with the 501st Singapore Garrison to raise funds for local kids charities. For a small donation, you could shoot a Storm Trooper two ways: with your camera, or with a foam dart gun (watch out for crotch shots!). Plenty of folks took them up on the offer as the queue for the donation event went round the block.

Around the main stage was a massive crowd of Japanese anime and gaming fans as voice actor Sugita Tomokazu held an onstage interview and live voice acting session for hundred of screaming fans. They discussed a number of things including his past and upcoming projects, his reasons for becoming a seiyuu, and his dressing up as a girl in recent fan events.

Queues can also be seen at the many sections of the events Walk of Fame. To the uninitiated, the Walk of Fame is a section of the con floor dedicated to artists signings and exclusive sales. There, you can pick up some cmics or a print or two from such comic luminaries as Cameron Stewart (My Little Pony), Harvey Tolibao (Iron Man), and Humberto Ramos (Crimson).

Since we were already there (okay — we lie — we totally stalked them!), we dropped by to say “Hi!” to the one and only David Mack, who we met at the previous STGCC. He is such a gentleman and we were so glad he liked the little things we got for him from Manila. We also dropped by Olivier Coipel’s table to have a comic signed for a friend — and he was super sweet and very friendly to everyone who walked up to him and say hello.

Last but not least, we snuck into the very end of the queue for the Simone Legno signing. I got butterflies when he actually waved and smiled when he saw me at the end of the queue (I guess my brand of crazy was memorable). We brought him a few things from Manila as well, including his request: lots of food :3 I guess his time in Manila taught him that when Filipinos gave souvenirs it was usually the edible kind!

Overall, it was an exciting and productive day, which could only get better as Day 2 promises even more excitement with the cosplay catwalk, Artist Alley finds, and some last minute sales!