Anisong and J-pop fans rejoice! Anime Festival Asia’s I Love Anisong Concert series is back with a bigger and better line-up of acts for your listening pleasure ❤ A total of eight artists have already been announced in what is just the first wave of the AFA 2014 I Love Anisong Mega Anime Music Festival — and there is definitely more to come! 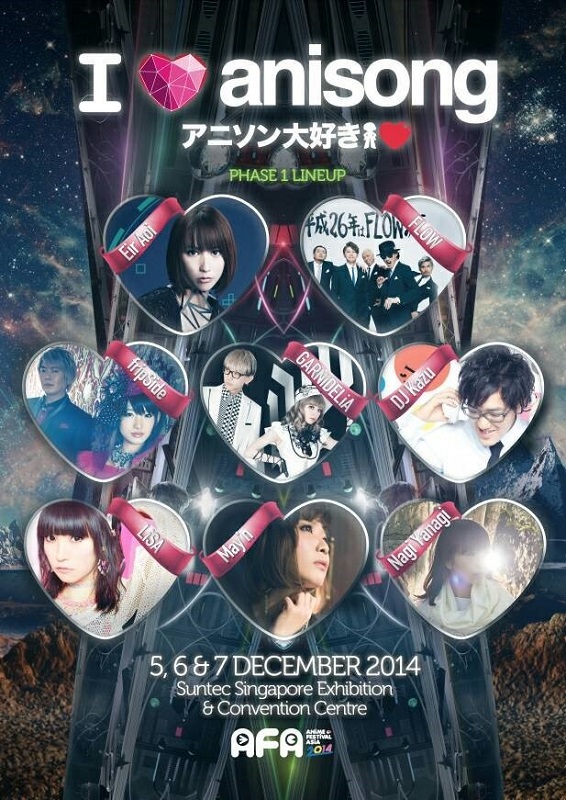 This year, music lovers can once again look forward to three days of adrenaline-pumping performances of theme songs of the region’s latest and hottest anime titles. AFA 2014 I Love Anisong Mega Anime Music Festival acts include a mix of returning anisong veterans as well as up-and-coming artistes, for an aural and visual extravaganza!

Eir Aoi her major label debut in October 2011 with her first single “MEMORIA,” which was selected as the ending theme to anime TV series “Fate/Zero”. Her latest hit “IGNITE” is the opening theme of the TV anime series “Sword Art Online II”. She has gained much international support and has performed in the USA, Hong Kong and Indonesia in 2014.

FLOW is the 5 piece mixture rock band with twin vocals, guitar, bass and drums. FLOW has become a household name with at least 7 of their records picked up to be theme songs for commercials and TV shows. Their 2004 single ‘Go!!!’ became the opening song for Naruto, which became an instant hit and the first of many anime theme songs that FLOW would come to create. They also actively performed in overseas such as Brazil, America, South East Asia.

A unit formed by Satoshi Yaginuma（sat）in 2002. In 2009, Yoshino Nanjo joined the unit. Their hit single “sister’s noise”, became the opening theme song for “A Certain Scientific Railgun S” in May 2013, and attained the top spot on its debut on the Oricon weekly chart. Starting October, they will be embarking on their first ever nationwide tour of 6 cities in Japan. They will also be performing at the Yokohama Arena in March 2015.

A music unit composed of MARiA, a female vocalist and toku, a music composer. toku, a music composer/sound producer, wrote and arranged hit songs of Angela Aki, LiSA, An Café and others. MARiA, an internet-born singer who performs with several musicians such as Jin (Vocaloid producer), as guest vocalist. 2014 was decided with their new single “ambiguous”, which was be the opening song of the popular anime “Kill la Kill”.

“DJ Kazu” is a J-POP & Anisong DJ. NHK Anisong Special, ANIMAX MUSIX, @JAM and many other animation festival and events including animation festivals in Europe and Asia. His outstanding mixing technique and cutting-edge track selections makes everyone excited and feel like dancing.

LiSA first came to prominence through the hit anime TV series, “Angel Beats!”. She’s had a string of major tie-ups with anime series, including the iconic “oath sign” for the series “Fate/Zero,” “crossing field” for the hugely popular “Sword Art Online” series, and “Rising Hope” for “The irregular at magic high school,” strengthening her popularity in both the anime and pop rock world.

MAY’N always “sings songs that will be everyone’s main theme.” In 2008, she performed as a singing voice of Diva of the Galaxy, Sheryl Nome, in the TV anime “Macross Frontier.” In 2014, her world tour “dots and lines” saw her in Indonesia, Singapore, Taiwan, Los Angeles, San Francisco, Korea, China and all forty seven prefectures of Japan.

Nagi Yanagi began musical activities as an artiste/vocalist. In 2009, she accepted an offer from supercell, and was the guest vocalist under the name “nagi”. In February 2012, she achieved her major solo debut, and to date has released 8 singles and 1 album.She is also highly active in live performances through nationwide tours.