Day 2 dawns bright and early with an onslaught of cosplayers, as the Cosplay Runway @ STGCC 2014 has been scheduled as the highlight of the con’s final day. Cosplayers from western comic giants Marvel and DC, sci-fi mega franchises Star Wars and The Transformers, as well as various Japanese manga and anime series clogged the con’s hallways — to the delight of photographers and spectators alike. 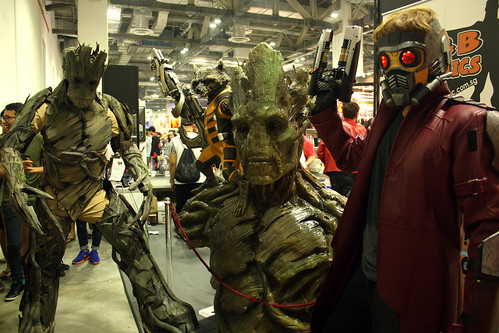 It was also Kids Day, so children aged 12 and below could enter the con for free if accompanied by a paying adult. Last but not least, it was a great day for comic collectors and merchandise fans as many of the shops and booths started dropping prices — slashing as much as SGD 5 for last minute comic purchases and encouraging buyers to buy in bulk for even more discounts. It’s a dangerous time for fans on a budget — I gotta say 8DDDDD

Like we said earlier, Day 2 is where most of the shopping gets done for the blog crew. Having thankfully escaped the clutches of Hot Toys and their event exclusives (we were not so lucky last year OTL), we proceeded to blow a wad of money at the Artists Alley and the many other merchant booths that dotted the con floor.

We snagged a few badges and stickers from up-and-coming artists and illustrators, checked out some prints and comics from artists and circles from the rest of South East Asia (major apologies to the Filipino artists exhibiting at the con — we know we can get your stuff back home ahahahaha >.>), as well as ogled a number of fandom crossover tees that we bookmarked for online purchase.

Onstage, both fans of American comics and Japanese manga were treated to fun and educational talks on the creative process. Cameron Stewart, Humberto Ramos, and David Mack talked about the creative process from a western comic perspective, while Kedouin Makoto, Sugita Tomokazu, and Shirahane Nao talked about the same for Japanese video games in a separate panel (understandably, photos and video were not allowed during the creator talks).

Always a con highlight year in and year out, the Cosplay Runway @ STGCC 2014 brought together a great mix of genres and titles — which is a great change of pace from mostly anime-heavy cosplay events. Both Star Wars and Marvel’s Guardians of the Galaxy were represented, as were online game League of Legends and animated-series-turned-webseries The Legend of Korra.

In the background, signings were still being held as fans queued to see their favorite artists for the last time — at least for 2014. David Mack, Cameron Stewart, and Simone Legno were side by side signing autographs for fans — although the wait was significantly longer for Simone’s queue because he didn’t just sign stuff but threw in a cute little illustration with every item signed (such a sweetie <3<3<3).

STGCC is and will always be one of our favorite cons, and although last year’s event felt bigger and grander (we really, really miss last year’s huge-ass Marvel booth), the relaxed pace and more manageable crowds at this year’s event also had its advantages.

We really appreciated the significant increase in the size and scale of the Artist Alley, which showed that the con did not just cater to the big franchises but to the little guys as well. We also liked the variety of costumes that the event’s cosplayers chose to don — it was’t just a sea of Hatsune Miku and Frozen cosplayers. Last but not least, Kids Day is always a great idea, as parents and their children can get into their fandoms have a lot of fun together!

We would like to extend our congratulations to the organizers and staff of the Singapore Toy, Game, and Comic Convention for another fantastic event, and we look forward to more great things from you! See you again next year!