The Rurouni Kenshin director and cast had another busy day ahead of them on the second day of their Philippine visit: besides several rounds of private press interviews, they also attended a special ceremony where they were appointed as “Cultural Friendship Ambassadors to the Philippines”. The honor was bestowed upon them by the City of Makati, and the ceremony was attended by city officials as well as top executives of Warner Brothers Japan and Warner Brothers Philippines. 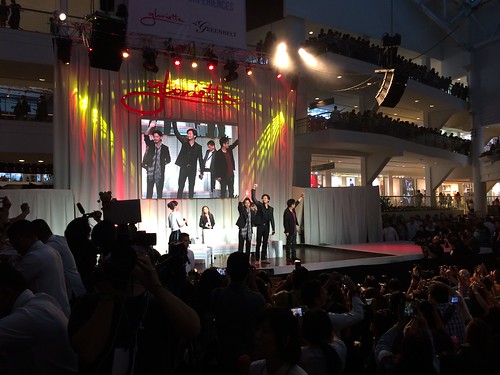 Later that day, director Otomo Keishi and actors Satoh Takeru and Aoki Munetaka made their way to the Glorietta Activity Center for an open press conference, where several thousand screaming fans welcomed them once again. At the press con, they gamely answered questions posed by members of the press and media — which ranged from their personal opinions of their characters all the way to their thoughts on the future of the franchise.

One of the more memorable questions asked by the floor was what would be Director Keishi Otomo’s reaction if Hollywood decided to shoot their own version of Rurouni Kenshin. The crowd booed and jeered, as it is a well-known fact that Hollywood rarely does justice to the Japanese franchises it decides to remake (ie Godzilla, Dragonball, The Ring, etc.). Otomo-Kantoku seemed to bask in the glow of the fans’ universal approval of his films, and replied that Hollywood was welcome to try (if they dared) 😀

Another interesting question was what were Satoh Takeru’s plans after the film wrapped shooting, and he replied that the film was such a positive experience for him overall, that he was looking forward to working with Director Otomo once again in a different project — to which Aoki Munetaka (who plays Sagara Sanosuke) replied with flawless English and perfect comedic timing, “What about me? T^T”.

Just like Day 1, Aoki Munetaka-san stole the hearts of all the fans with his boundless enthusiasm for the film and his unbridled enjoyment in the events. He did his best to respond to most of the questions in English, and only resorted to Japanese when the conversation took a turn for the serious. Just as Satoh-san said about his character Kenshin becoming an influence in his life, Aoki-san also felt that he and his character Sagara Sanosuke were so alike that he could not help but love the guy.

The Press Con wrapped up with the Japanese stars awarding the winners of the Glorietta Cinemas Instagram contest their exclusive signed posters of Rurouni Kenshin (everyone also got bonus hugs from Aoki-san). Lastly, the director and cast once again thanked the Filipino fans for coming out and expressing their immense passion for the film, and asking everyone to watch the movie when it comes out on 20th August 2014.

Aside from covering the Press Con, we were also on production duty that day — escorting the Japanese film crews and writers around as they covered the event for their domestic media outlets. The Fuji TV people in particular were genuinely surprised and thrilled at how big a deal this RK event was for Filipino fans, as they interviewed cosplayers and collectors alike. We genuinely hope that the film, anime, and manga industry in Japan take this as a positive sign and start concrete measures to release their titles as quickly as possible in Manila and the rest of the Philippines 🙂