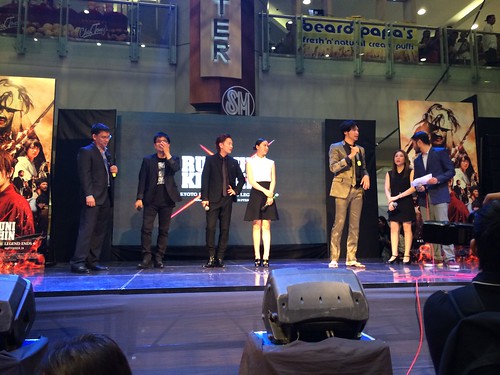 It was an exciting evening not just for the Filipino fans of Rurouni Kenshin, but for the Japanese cast and the multinational staff as well. We’ve had the honor and the pleasure of helping out at this event as Japanese interpreters; I was assigned to assist the handsome and charming Aoki Munetaka-san, who plays the lovable rogue Sagara Sanosuke in the film.

The Guests of Honor arrived in Manila mid-afternoon, and proceeded to their hotel in Makati City where they began to prepare for the evening’s festivities. They then made their way to the SM Megamall in Mandaluyong City, in unmarked vans escorted by the PNP Highway Patrol. The unabashed screaming started the minute they got off their vehicles and walked to the SM Megamall Activity Center, located at the Mall’s basement level.

The director and cast were clearly surprised by the rousing welcome, as more than the expected number of fans showed up to line the red carpet. They gamely signed autographs and posed for photos (they were quite close to the crowd, unlike at K-pop events where the stars could only be glimpsed behind three sets of barricades). They also personally greeted local cosplayers who showed up in Rurouni Kenshin attire for the premier.

The cast and director then came up onstage to answer a few questions. Leads Satoh Takeru and Takei Emi obviously drew the loudest cheers, as the two actors also had their fans outside of the Rurouni Kenshin franchise. Takei-san expressed her excitement for being on an international premier for one of her Japanese films for the first time in her career. Satoh-san made the extra effort of speaking in Filipino — introducing himself by saying, “Kumusta! Magandang gabi po! Ako po si Takeru Satoh. Masaya ako nagkita tayo! Salamat po. Mahal ko kayo.”.

Director Otomo was also very vocal about their appreciation of the Filipino fans, citing that they did not expect this sort of response from the Manila audience, and that they hoped this would be the start of more Japanese movies being released almost simultaneously in the Philippines. However, it was Aoki-san who definitely stole the show, egging the crowd in cheering for his character Sagara Sanosuke. Aoki-san also gamely responded to the interview questions in English, without the assistance of an onstage interpreter 🙂

As the red carpet event wrapped up, the Rurouni Kenshin stars and the director where whisked away to the SM Megamall Cinemas to attend the invitational advanced screening of “Rurouni Kenshin: Kyoto Inferno”. There, some two hundred lucky fans got to ask them more questions, as well as view the new film (slated for local release on 20th August 2014). Last but not least, they were asked to autograph the giant Rurouni Kenshin photowall displayed at the concourse areas of the SM Cinemas.