The biggest and brightest event on the Philippine anime con circuit is back! Cosplay Mania 2017 is coming at you from the SMX Convention Center Manila, SM Mall of Asia Complex, Pasay City. Slated for the 30th of September and the 1st of October, expect only the best from Japanese pop culture icons such as Sayo Yamamoto, Fuuko Noda, Wataru Hatano, and Koutarou Nishiyama! Joining them are Japanese music luminaries Konomi Suzuki, kradness, and Shiena Nishizawa! 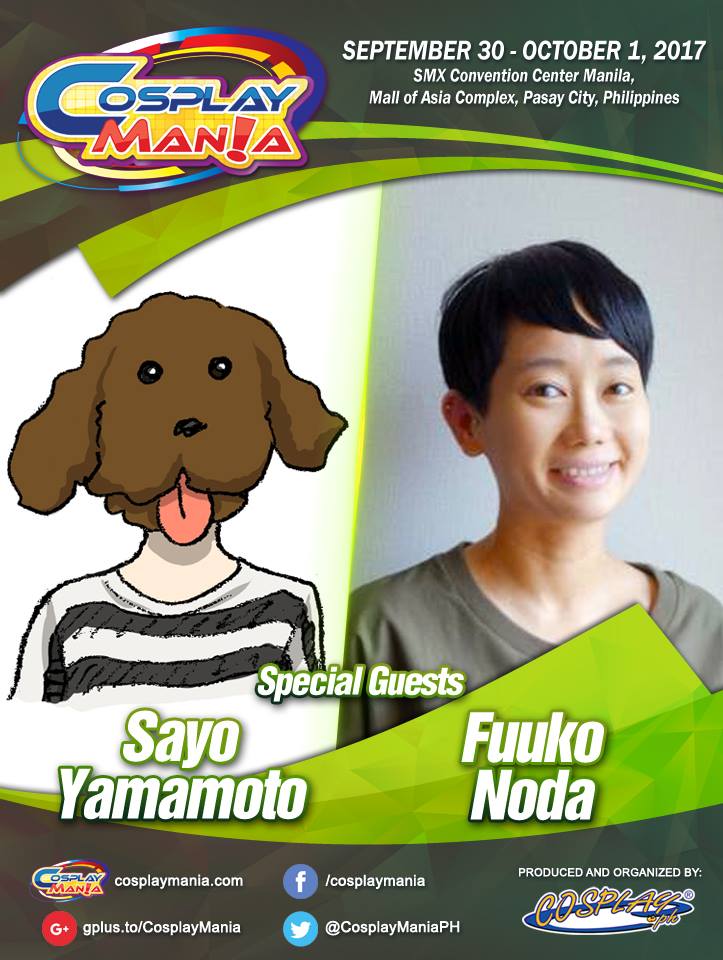 Sayo Yamamoto is a Japanese anime director. She is best known for directing the anime series Michiko & Hatchin, Yuri!!! on Ice, and the critically acclaimed anime series Lupin the Third: The Woman Called Fujiko Mine — which was awarded the “New Face” award from the Japan Media Arts Festival in 2012.

Fuuko Noda is a producer from the Japanese animation studio MAPPA. She is the animation producer for Yuri!!! on ICE and Punchline. 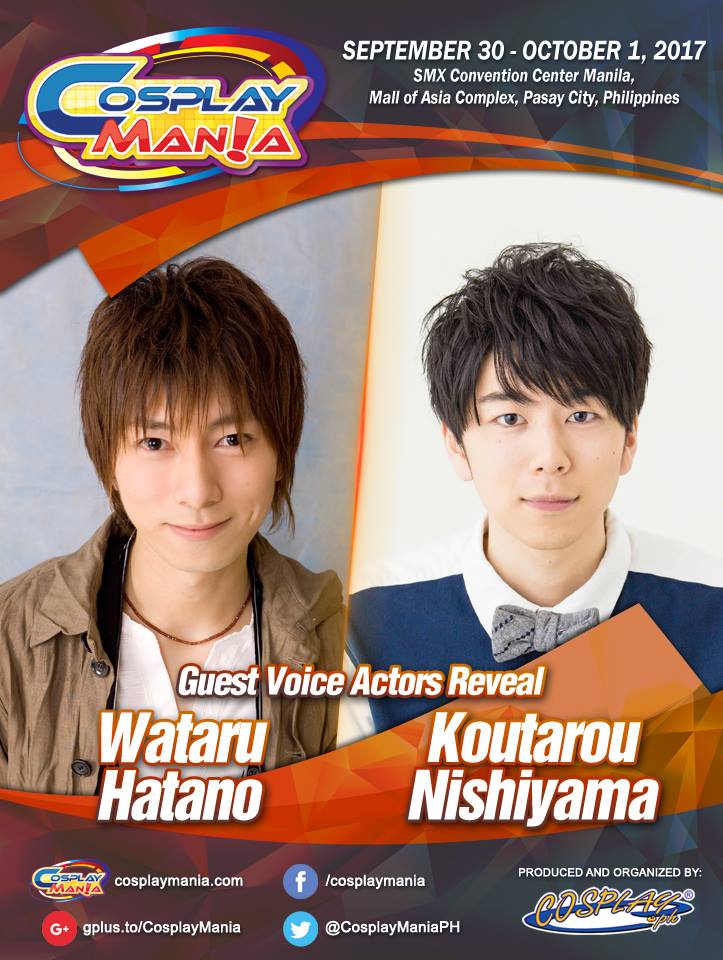 Wataru Hatano is a Japanese voice actor and singer known for his role as Gajeel Redfox from the anime “Fairy Tail”. His other notable anime roles include “My Hero Academia” as Hitoshi Shinsou, ”Yowamushi Pedal New Generation” as Ryūhō Danchiku, and “Kuroko’s Basketball as Reo Mibuchi. As an artist, he released “You Only Live Once” under the name “YURI!!! on ICE feat. w.hatano” in 2016. It was used as the ending theme of the popular TV anime “Yuri!!!! on ICE” and became a smash hit.

Koutarou Nishiyama is a Japanese voice actor whose major roles include Atsushi Kinugawa in “Cute High Earth Defense Club Love!,” Sakutaro Kirara in “Jewelpet: Magical Change”, Kazuhito Narita from “Haikyuu!!”, Yoshiharu Hisomu in “Kiznaiver” and Kanata Shinkai from the mobile game “Ensemble Stars!”. He also hosts a number of radio shows such as “Taro Yume!”, and “Koutarou to Yuuichirou no Hyorotto Danshi.” 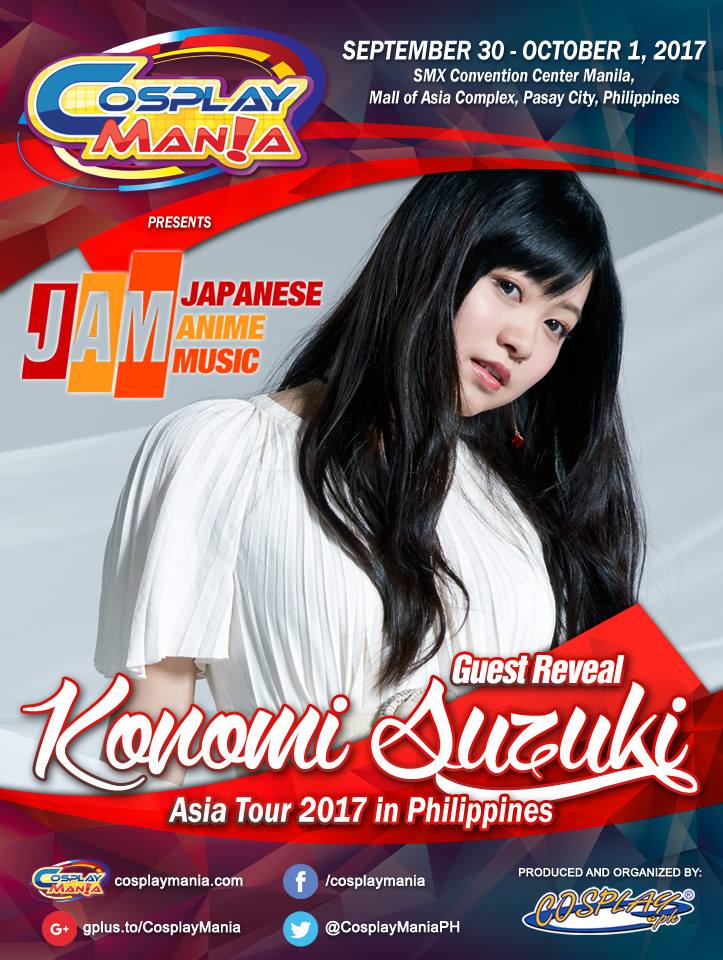 The first prize winner of the All-Japan Anisong Grand Prix in 2011, Konomi Suzuki released her first single “Choir Jail,” the title track for the opening theme of Dusk Maiden of Amnesia, when she was only 15. Konomi has performed at the biggest anisong festival, Animelo Summer Live ever since she debuted and has sung the themes for various anime such as “This Game” for No Game No Life and “Redo” for Re:Zero Kara Hajimeru Isekai Seikatsu. 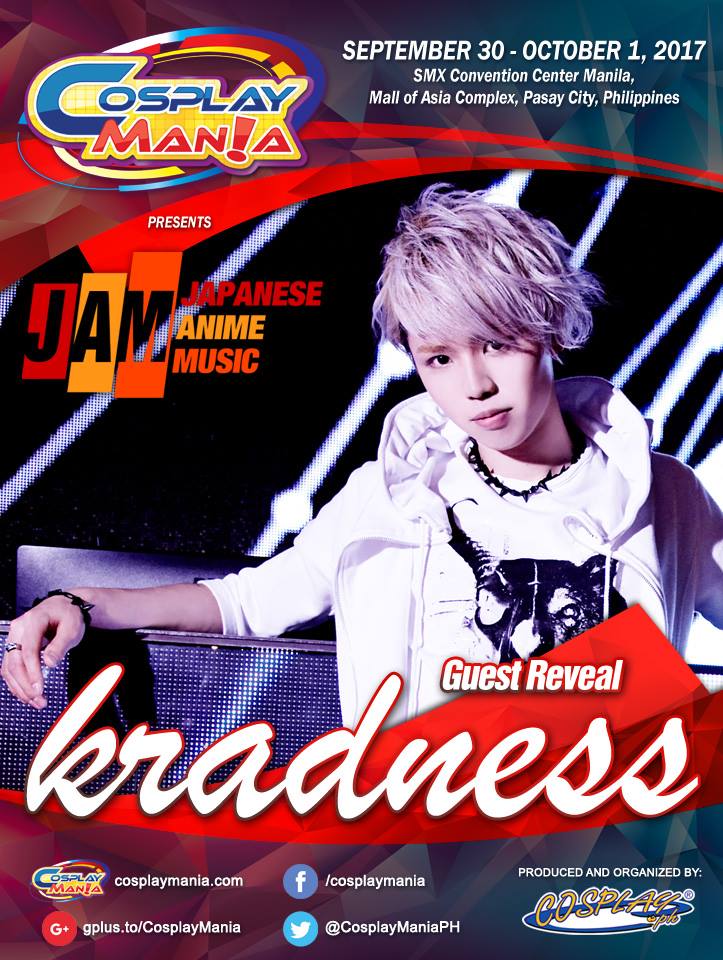 With over 180,000 followers on YouTube and Twitter, kradness has fans not just in Japan, but all over the world. While using his unique high-toned voice as a singer, his music is a fusion of several genres like EDM, Pop and Rock. Able to become a DJ and singer at the same time, he has also set up his own fashion brand “REMERA,” as well as being a producer and debuting as a model. He is also the vocalist for the unit “Quarks” with well-known vocaloid music producer Camellia as the DJ and composer for the unit. 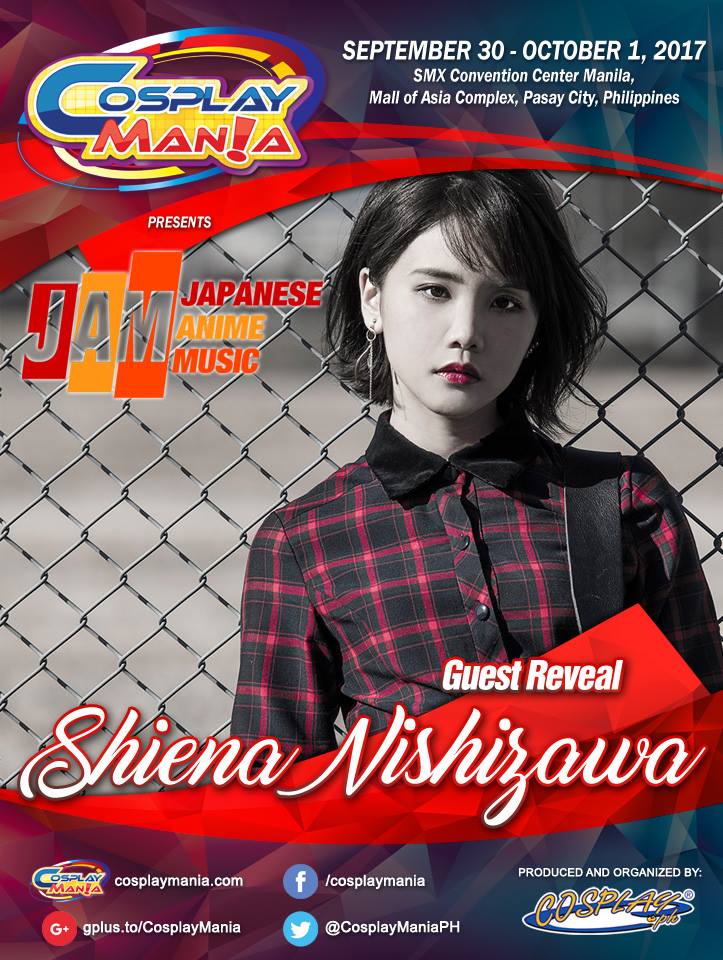 The winner of the Grand Prix in the first FlyingDog Audition, Shiena went on to release her first single “Fubuki,”the song used as the ending theme for Kantai Collection. She has also the opening theme for The Asterisk War and Aria the Avvenire. Her fourth single “Kikan” was also the theme song for KanColle: The Movie. Shiena’s first album Break Your Fate was just recently released in March of this year.

Tickets to Cosplay Mania 2017 are now available via SM Tickets! Choose from VIP, Gold, and Silver packages that give you access to their huge exhibition floor, their two event stages, and the much awaited JAM Concert! JPOP Manila will also be covering the event, so check us out on Facebook, Instagram, and Twitter!