Touted as one of the biggest cosplay events, (if not THE biggest) cosplay event held in the Philippines, Cosplay Mania has once dawned upon us. 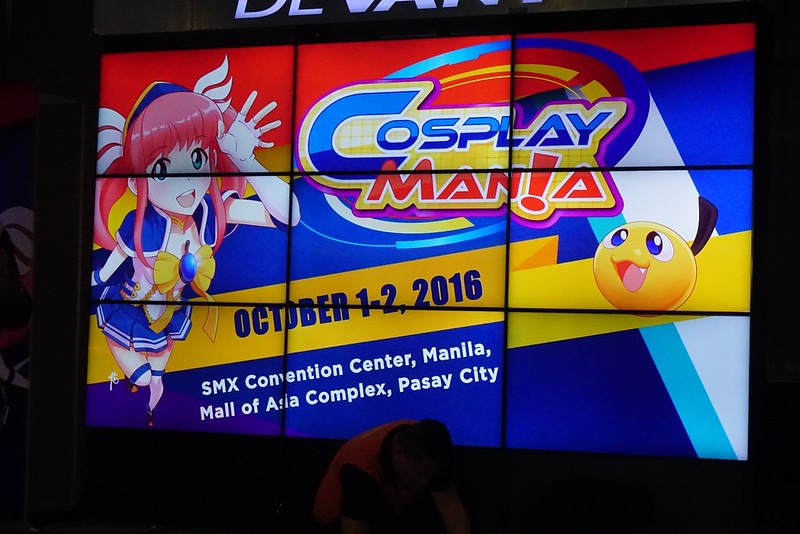 Held last October 1 and 2 , the convention titan once again made waves in the local cosplay/convention scene. 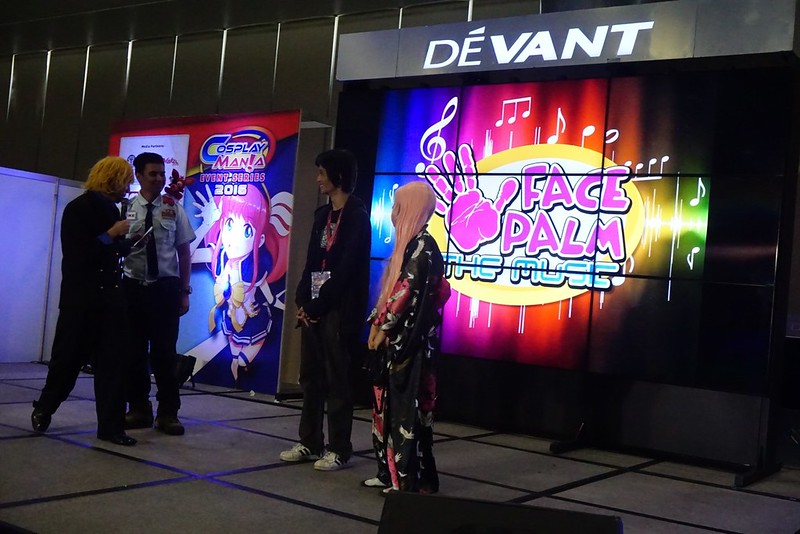 The Philippines isn’t exactly lacking when it comes to conventions, and some would argue that if you’ve attended one convention, you’ve seen them all. Which is true to some extent, once you’ve gone to enough conventions, the formulaic approach of Gyudon eating contest, cosplay catwalk, anime songs quiz and random filler may get tedious. 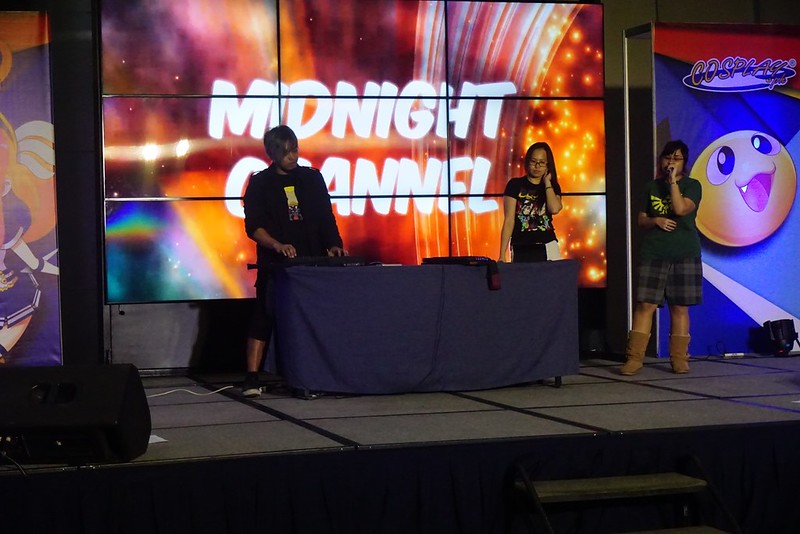 Keeping the audience coming for more is a herculean task. As a premier cosplay convention, Cosplay Mania has managed to cater to those who are hungry for more Japanese-culture related events and for those who are still getting used to the whole convention scene. The ticket tier system ensures that you only pay for what interested in. No more gripes about paying for something that you never really were interested in and it keeps the ticket prices reasonable. 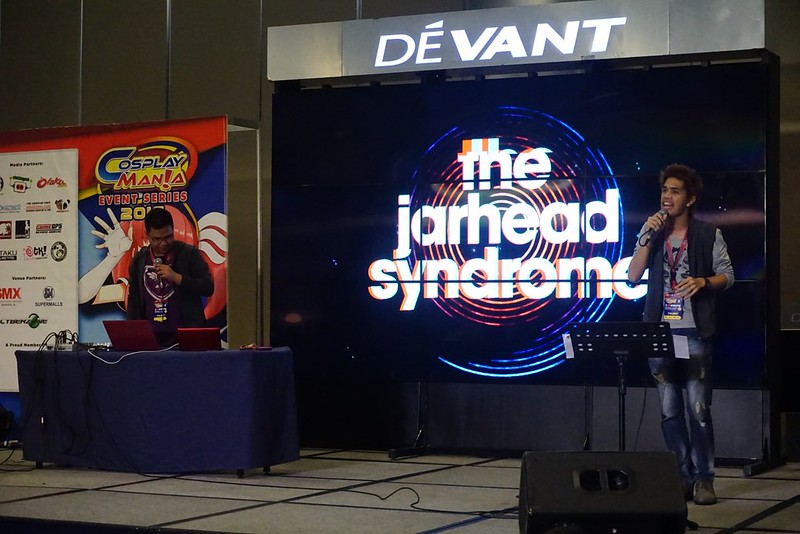 Please do keep in mind that I shall be handling this event report as someone who has limited access to the whole event (similar to Bronze ticket access). But fret not, the whole magnetic-rose.net team did manage to cover the whole event, it just took the three of us because the event was huge. 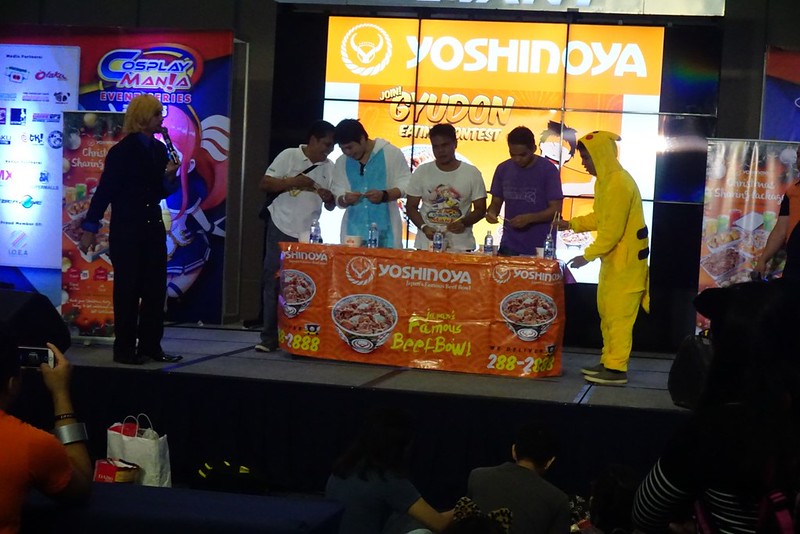 It may be quite odd to say this, but the strength of the event for the Bronze ticket holders would actually be the off-stage activities and the dealers’ booth. While the stage did have a few events going on (like the omnipresent Gyudon eating contest and the bands playing JMusic), the life of the event was on the bustling dealers’ centre where there are a lot of booths showcasing art, selling collectibles and of course offering food and refreshment. 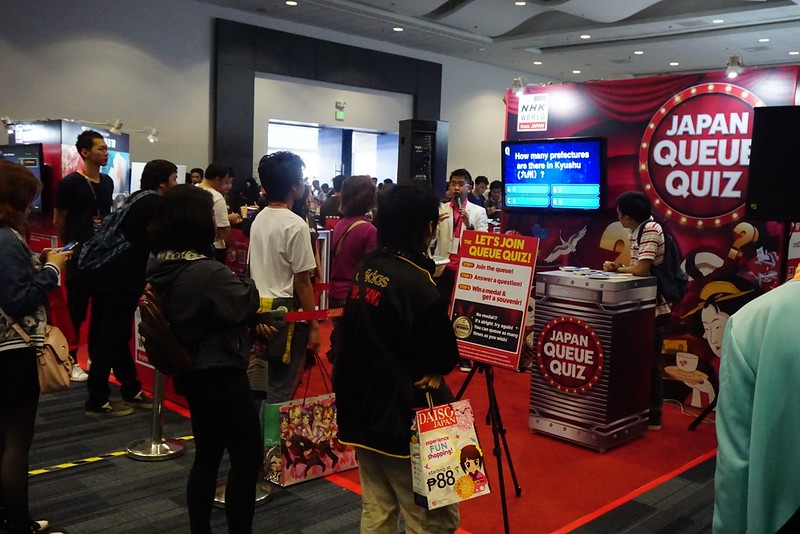 The dealers’ centre totally felt segregated from the EX stage, the sound of the programmes were drowned out by the very enthusiastic pitching of the person in charge of the Japan Queue quiz in NHK’s booth. 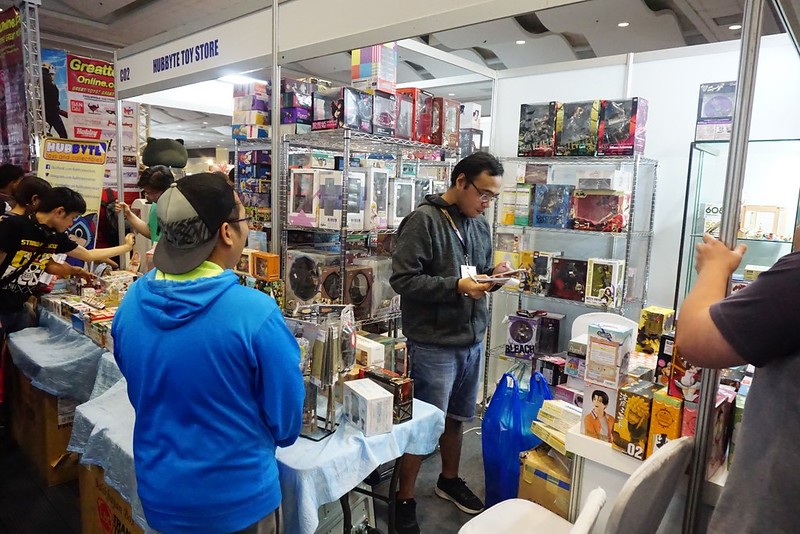 NHK’s booth was indeed the belle of the ball , in the bustling dealers’ section Their Queue quiz was very entertaining, people line up and they take turns answering NHK-world inspired questions. Let’s just say that we now have an idea of how much sumo-wrestlers make in a year. 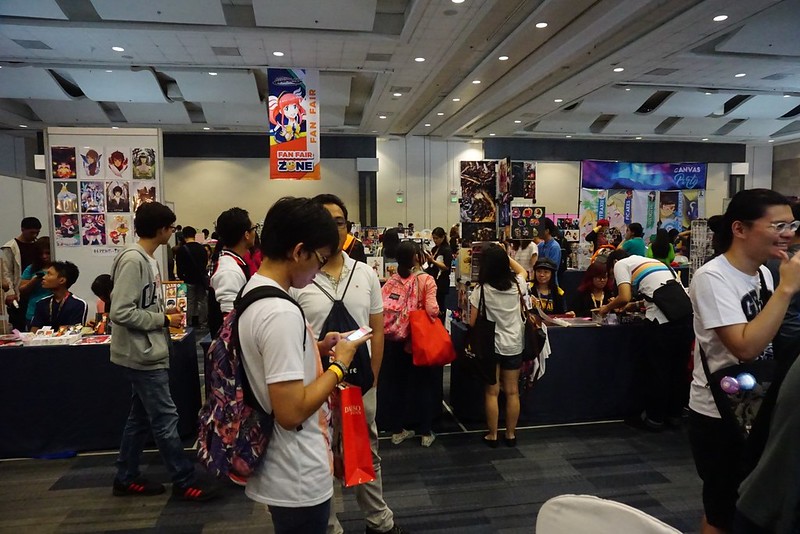 And in a particularly surprising turn of events, Domo-kun (NHK World’s official mascot) showed up to lead a round of Domobics (which comes from Domo and aerobics). The crowd enthusiastically flailed around to show they had the moves like Domo! 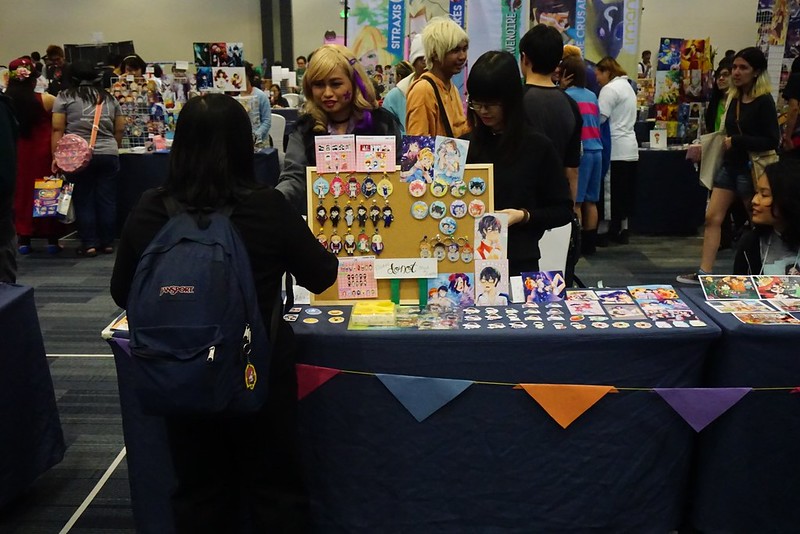 And of course there were some booths that caught our eye! The adorable Mobile game, Notice Me Senpai (Imagine Neko Atsume , only this time with bishounen Senpai) had a booth. Please do check out the game and prepare to swoon over them senpais! 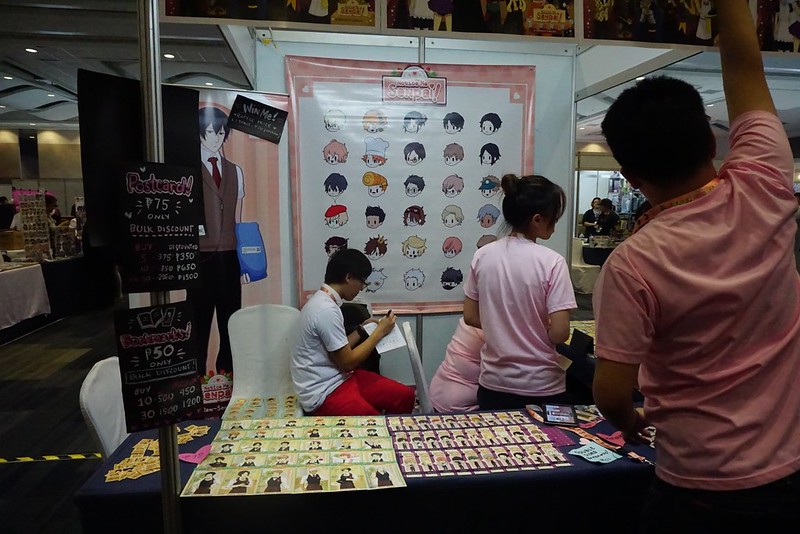 Black Monkey Pro was also there, and it was kind of sad for BL fans and for Black Monkey Pro fans, since this is the last convention they’ll be attending. Here’s to wishing them luck on their future endeavors. 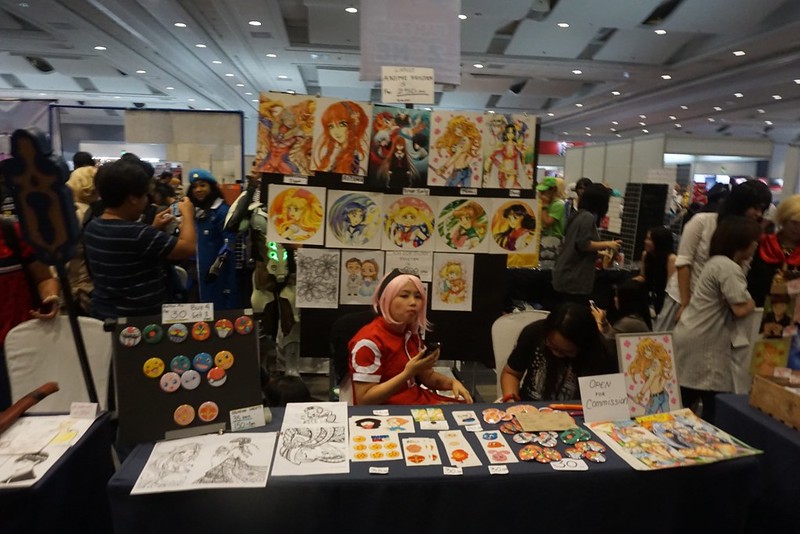 DFA’s booth was showcasing their superhero character in series of posters campaigning against fixers and corruption. Pretty nifty posters to be quite honest. 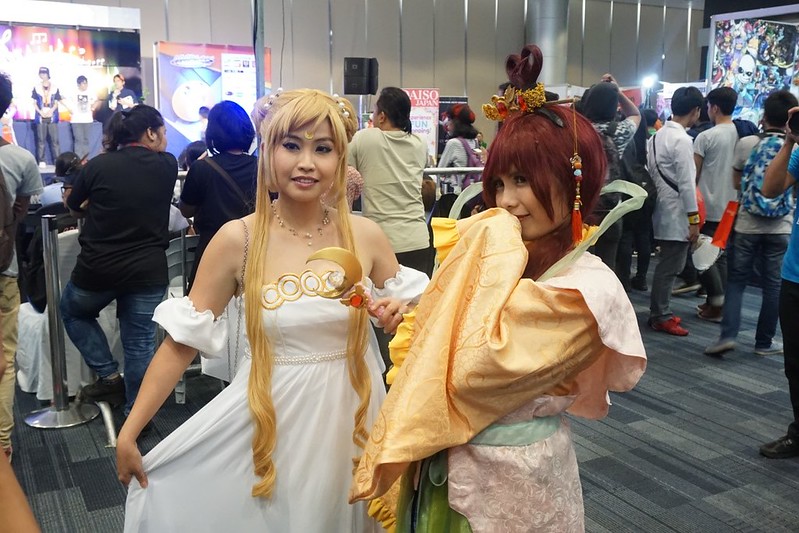 And of course, no convention would be complete (specially with Cosplay in the event name) without cosplayers! The cosplayers of CosMania’s were very much varied. Ranging from recent anime like Mob Psycho 1000 to the niche Saint Young Men to female fan-favourite Touken Ranbu, the cosplay sure did dazzle even though they weren’t on stage. 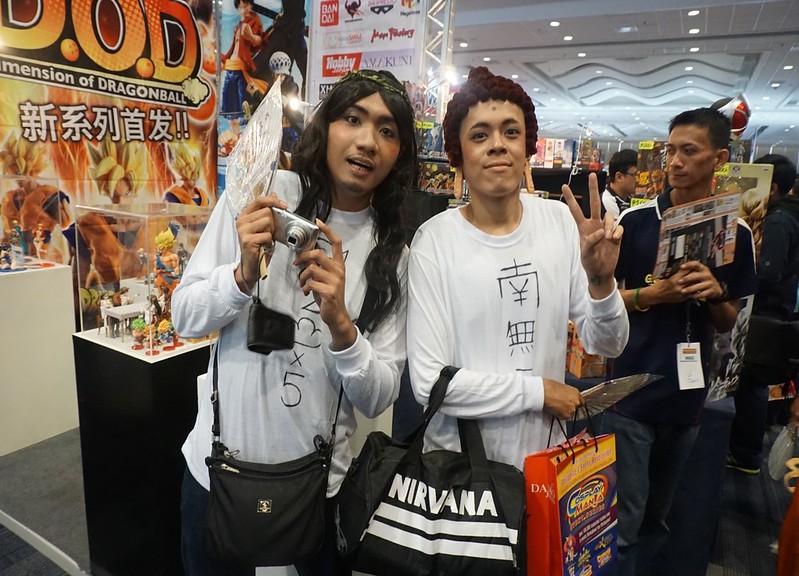 While I have nothing against the staples of the CosMania programme, I feel that they really could have shaken things up a bit. If the NHK booth managed to take the attention away from the stage events, then perhaps, the programme needs to be tweaked a bit? 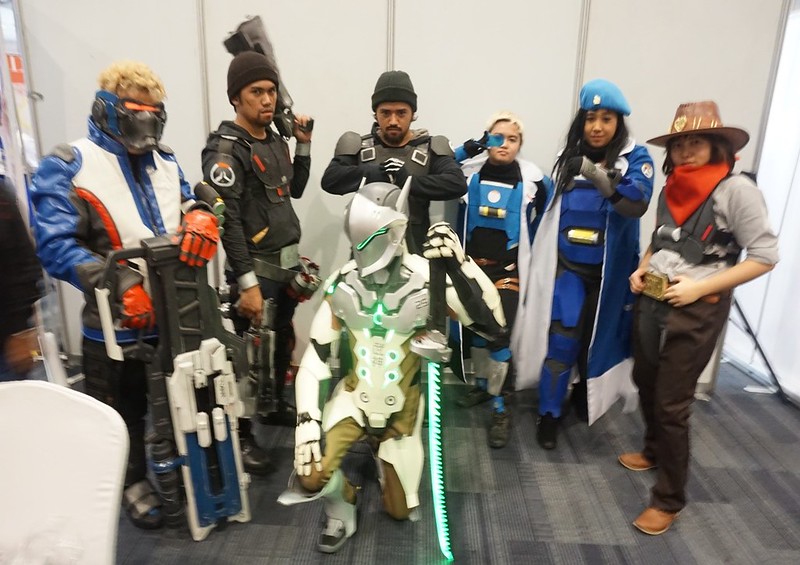 I understand that people can get more out of the CosMania by upgrading their ticket, but it really wouldn’t hurt to shake things up a bit, even for the basic ticket holders, after all these would be the majority of the congoers. Make it an experience that will stand out among the other conventions out there.