AsiaPOP Comicon Manila 2016 (APCC Manila) — touted to be the biggest three-day pop-culture extravaganza slated on August 26 to 28 at SMX Convention Center in Pasay City—will unveil Hall M, a showcase of Marvel content in the fields of gaming, television, and movies. Universal Events and Entertainment, the organizer of APCC Manila, has tied up with Marvel for this exclusive, first-of-its-kind showcase at any convention in Asia. 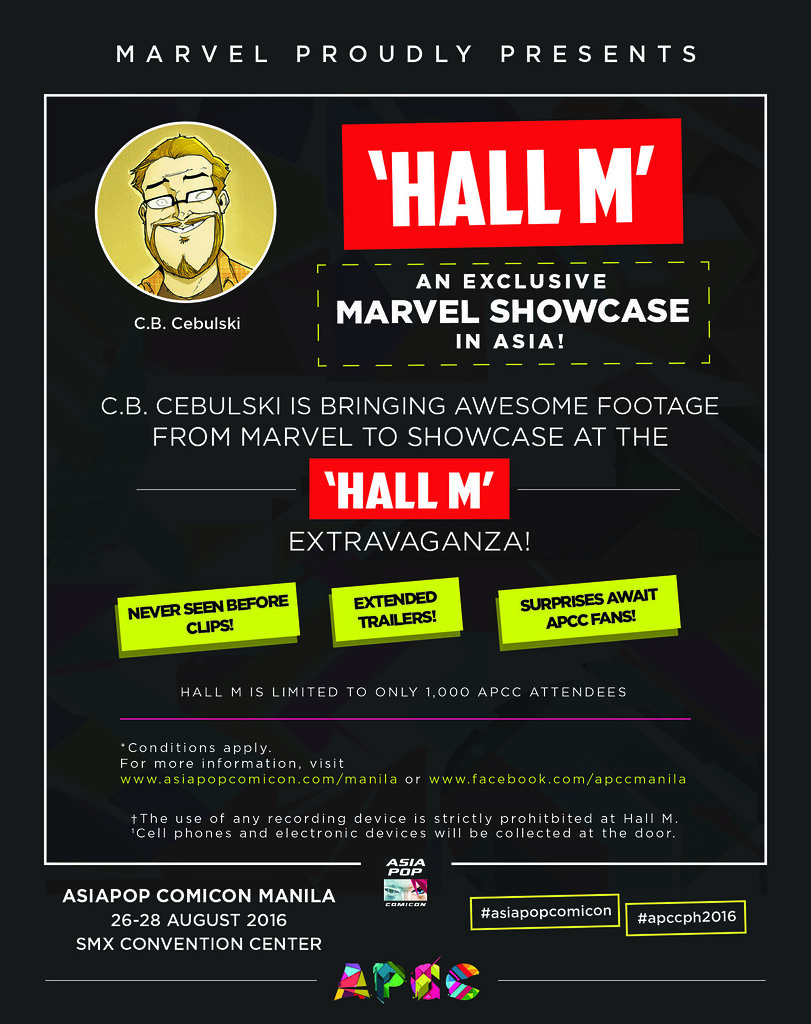 Hall M is expected to excite fans as nothing gets geeks’ blood pumping like the word ‘exclusive’. Imagine sights, sounds, and all other spectacles one might see and hear ahead of the rest of the world, or awesomeness the rest of the world may never see or hear. It’s this thrill that makes people wait long hours, endure snaking lines, and try to secure slots by hook or crook.

“As a group we enjoy a global strategic alliance with Marvel on multiple fronts and so we are glad to be able to extend our partnership by offering never seen before Marvel content to die-hard fans and geeks in the Philippines. This will be first-of-its-kind Marvel showcase at a pop culture convention and visitors will be able to witness an epic exhibit of multiple surprises at this year’s AsiaPOP Comicon Manila.” said Abdulla Mahmood, Director – Marketing and Business Development of Al Ahli Holding Group (AAHG). Universal Events & Entertainment is a subsidiary of AAHG.

Fans will be treated to never-before-seen footage outside of San Diego Comic Con of Marvel’s upcoming Doctor Strange film at APCC Manila’s Hall M, including content from Marvel’s television and web series. Hall M is limited up to 1,000 attendees.

For C.B. Cebulski, Marvel’s Vice President of International Development & Brand Management, he said, “I’m thrilled to be coming back to APCC Manila this year! Given the overwhelming fan response to last year’s Captain America: Civil War trailer debut, Marvel is letting me bring even more fantastic footage with me, this time from all of our different divisions, to showcase at our extended ‘Hall M’ extravaganza! Some clips being shown for the first time! It’s all still a secret, but just know that Hall M is guaranteed to be a one-of-a-kind Marvel experience in Manila!”. Cebulski is returning to APCC Manila this year to once again scout the best artistic talent in the country.

APCC Manila 2016 tickets are now available via SM Tickets—made possible by its partner SM Group—with ticket prices PhP550 (one-day pass), PhP850 (two-day pass), and PhP1,050 (three-day pass). All these will give the ticketholder access to stage activities, performances, and the main show floor. The event is free for children aged five and below for all days, but a valid identification is required for verification purposes before entering the show floor.