It’s nearly October and we only have a couple of days left til Cosplay Mania 15! Cosplay Mania 15 will be held at Function Rooms 2 to 5 and Meeting Rooms 2 to 9 of the SMX Convention Center Manila, SM Mall of Asia Complex, Pasay City. Gates open at 11AM, and tickets start at just PhP 198 — available over-the-counter at SM Ticket Counters or online via smtickets.com.

Boundaries are broken this year as Cosplay Mania 15 features a fresh new slate of Japanese performers, international cosplay celebrities, and cutting-edge competitions! Cosplay Mania 15 is a hotly-anticipated event and is a rare opportunity for fans from all over the Philippines to get together and celebrate cosplay. Still undecided whether to attend or not? We’re giving you five great reasons to get your tickets now! 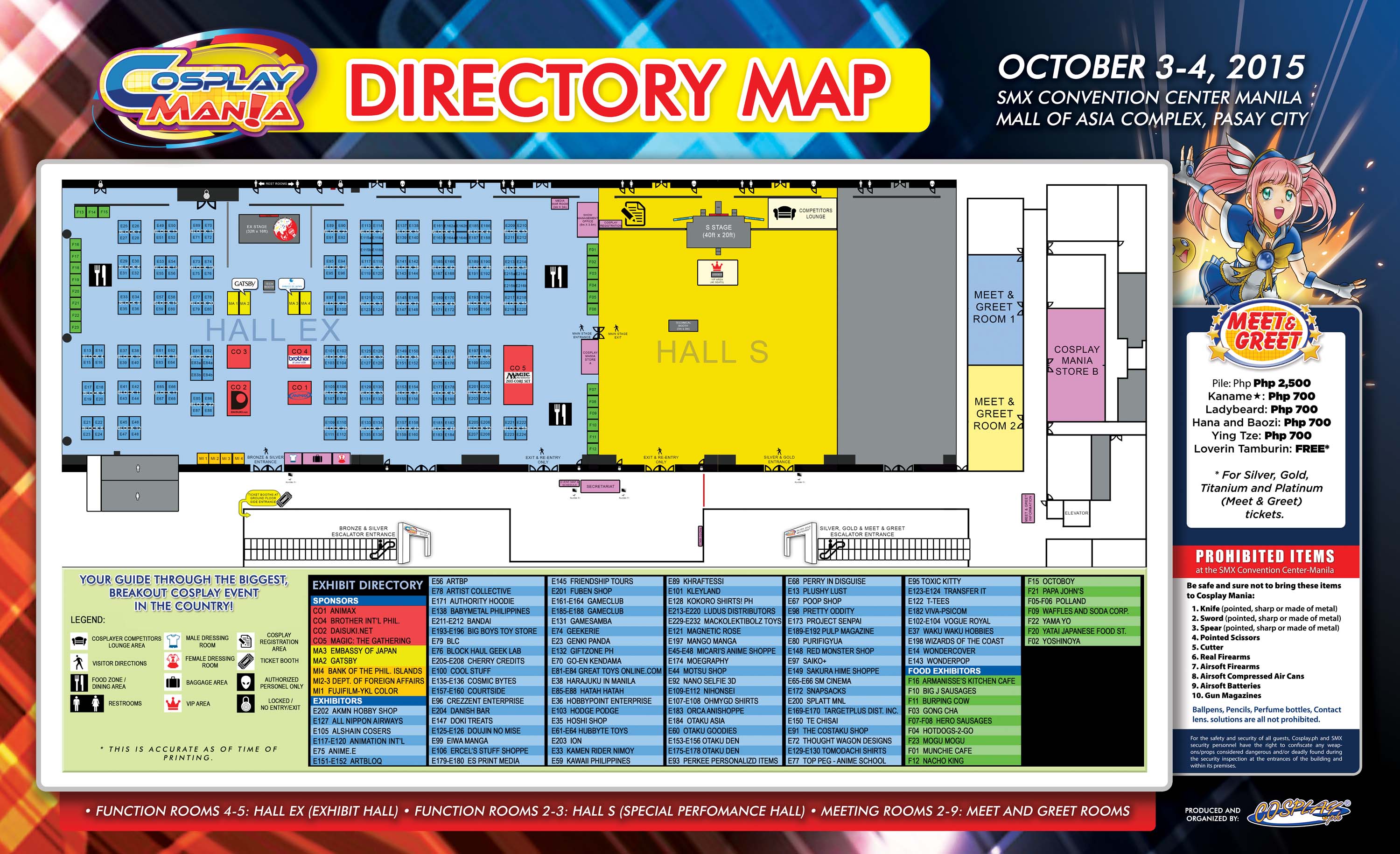 Cosplay Mania 15 is one of the biggest pop culture conventions in the Philippines — with over one hundred exhibitors and dozens of featured events spread out in three main experience zones. The main EX Hall boasts of local and overseas exhibitors bringing fans the best merch from Japan and the rest of the world.

The exclusive S Hall features cosplay competitions, guest performances, and the second installment of JAM Japanese Anime Music. Last but not least, the Meet and Greet rooms lets fans meet their cosplay and J-pop faves as well as get a hold of their exclusive merchandise.

There is an exclusive Early Bird raffle reserved only for those who purchased their tickets early. These Early Bird winners stand to win signed collectibles from Cosplay Mania 15 guests, a Fujifilm Instax Camera (to snap a selfie with your favorite cosplayers!), or even a free upgrade to the elusive Titanium Ticket tier!

Even if you didn’t get in on the Early Bird goodies, there are still plenty of freebies in store — from Magic: The Gathering demo decks to sponsor gift bags to back issues of your favorite anime and gaming magazines, there’s a little something for everyone. And if you get tired lugging all that swag around, there’s plenty of free food options from product samplers to Yoshinoya’s Gyuudon Eating Contest (come hungry!)! 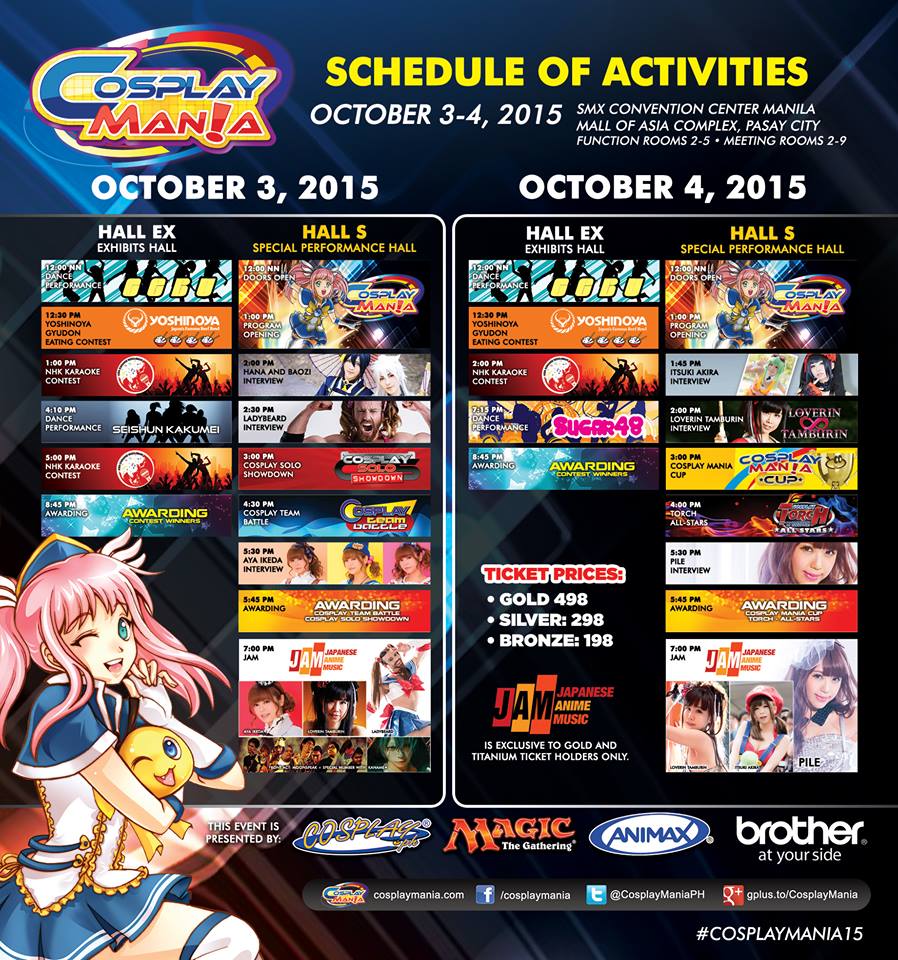 It’s time for Cosplay Tournament of Champions again — where only the best teams in Philippine cosplay are pitted against each other, to select the nationwide representative to Anime Festival Asia’s Regional Cosplay Championships! Rounding out the gauntlet of competitions are other events such as Cosplay Solo Showdown, Cosplay Team Battle, and Cosplay Mania Cup!

And now for the first time ever, the Asia Karaoke Nodojiman Contest Philippine Leg is being held at Cosplay Mania 15! Organized by NHK Enterprises and Japanese karaoke company DaiichiKosho, the champion and two special-prize winners from each respective contest will be invited to the finals to be held in Tokyo in March 2016!

Meet your favorite cosplayers up close at our exclusive Meet and Greet sessions, or catch them onstage as they perform for thousands of screaming cosplay fans! Featuring a star-studded line-up of international cosplay talents — including Jesuke, Usagi, Ying Tze, Kaname, Hana and Baozi, and Ladybeard, there’s plenty to see and post about on social media (don’t forget to use the hashtag #CosplayMania15)! 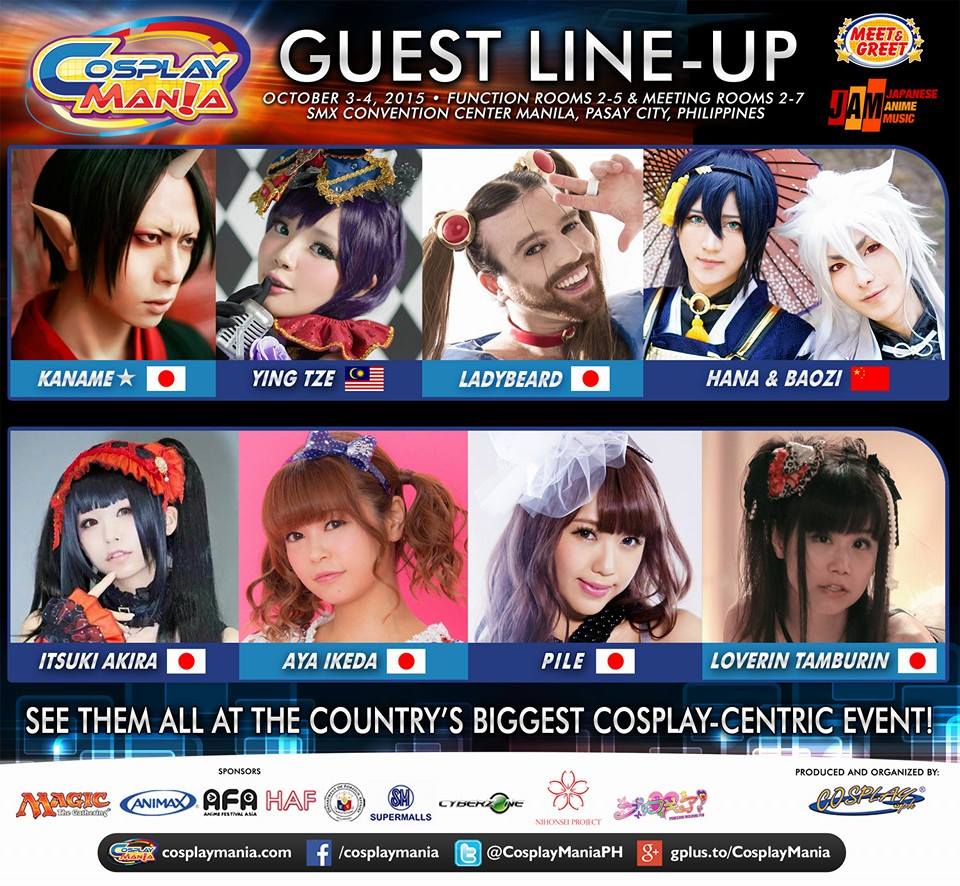 Fans spoke and Cosplay Mania listened! They are bringing in a bigger and better JAM Japanese Anime Music concert — with performances by Moonspeak featuring Kaname, Ladybeard, Akira Itsuki, LOVERIN TAMBURIN, and Aya Ikeda! JAM will also play host to the first Philippine concert of Eriko Hori, AKA PILE — but who is probably best known as the voice talent behind the Love Live! character Nishikino Maki!

Scream yourself hoarse as our JAM performers bring you hits from anime titles such as Heartcatch Precure!, Suite Precure♪, Smile Precure, Disgaea, Natsuhiro Drops, Oedo BlackSmith, and of course Love Live! School Idol Festival! Let’s give our guests a warm and respectful welcome and make them feel the passion and sincerity of their Philippine fans!

Are you a Gold Ticket holder? Are you a big fan of ONE OK ROCK?! Then we have massive news for you!!! Cosplay Mania 15 will be raffling off tickets to the upcoming gig ONE OK ROCK 2016 “35xxxv” Asia Tour Manila — happening on 19th January 2016 at the Mall of Asia Arena in Pasay City! This is your chance to catch one of Japan’s biggest rock acts live in Manila!

So ready, set, go to your nearest SM Ticket Counters or online via smtickets.com — see you guys there!

magnetic-rose.net is an Official Media Partner of Cosplay Mania 2015.