It’s finally here! Japan Music Festival with the cooperation of COSPLAY.PH proudly presents “LiSA ~ANOTHER GREAT DAY in MANILA~ 2015” on the 27th of June 2015 at the Samsung Hall, SM Aura Premier, Taguig City. Get your tickets now via smtickets.com! 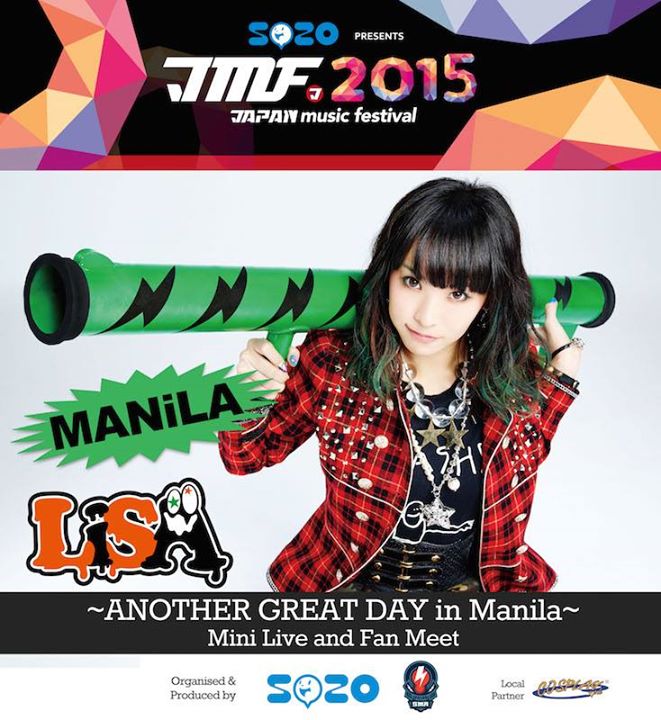 As LiSA’s first performance in Manila draws closer, here are rules and guidelines for the event:

– Please come on time. Doors to the concert hall will open at 5pm and the concert will start at 6pm. The organisers reserves the right to bar entry to latecomers and only admit them at an appropriate time.
– Bringing of food and drinks into the venue is not allowed inside the concert hall.
– Should you wish to attend the concert in costume, you may change only at the comfort rooms within the venue. SM Aura reserves the right to request cosplayers to dress into regular clothes, should they wish to enter the mall premises. The mall does not allow people to walk through the mall in costume.
– For everyone’s safety, please refrain from running or pushing other patrons. Please maintain an orderly line when entering or exiting the concert hall.
– Photography, video and audio recording is strictly prohibited. Anyone found taking photos or videos without authorization will be escorted out of the venue without refund.
– Attendees who have unruly, rude or harmful behavior shall be escorted out of the venue without refund.
– Poster / Fan signs will not be allowed inside the venue so as to not block the view of other patrons.
– For any concerns, please feel free to approach Guest Relations staff at the venue lobby.