PSICOM’s leading otaku lifestyle magazine, Otaku Asia held its first O-kun Fiesta last weekend, 16th May 2015 at Function Room 1 SMX Convention Center Pasay. It was a fun and well-organized little event that gave fans a taste of the Otaku Asia lifestyle. Con events included cosplay competitions, a karaoke battle, and the awarding of the 2014 Cosplay Costume of the Year Awards. 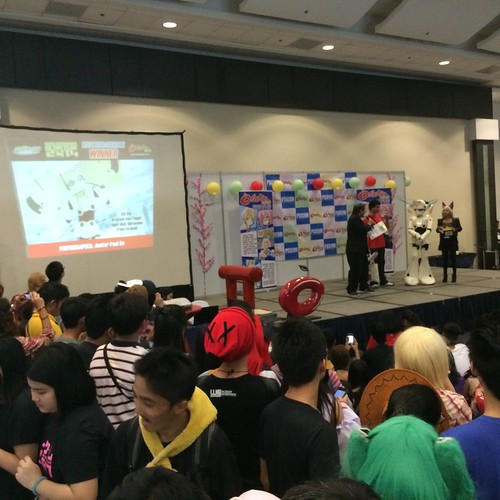 As a maiden event, O-Kun Fiesta had the fun vibe and relaxed feel of a small collegiate or university con (as opposed to mega-hall monstrosities such as Cosplay Mania and Anime Festival Asia). But their small size worked to their advantage, as many participants got to go around and sample everything that the booths had to offer, as opposed to being trampled underneath by the thundering hordes.

Similar to a previous con we attended, we set up a little shrine for omikuji or Japanese fortunes. We tried our best to make the experience as close to what happens at a Japanese temple as possible, including setting up a torii or vermillion gate, a few stone lanterns, and a few temple buildings for added color. We hope that the ones who got to try it out have the chance to go to Japan for a real omikuji experience very soon ❤

O-Kun Fiesta also had a little bit more to offer than the standard con with the awarding of the 2014 Cosplay Costume of the Year Awards, as well as the special autograph session for show presenters and special guests Jia Gold Bustamante, Ashley Misaki, and Marky Ilano — among others.

Of course, being the O-Kun Fiesta team’s first rodeo, there are a couple of things that can be improved. A little lighting onstage would’ve been fantastic. Also, time management for stage events could also be improved — however this is not entirely the organizers’ fault as one of their guests had a really had time sticking to the schedule ಠ_ಠ

Overall, it was a fun afternoon and a great way to spend the weekend, and we are already looking forward to O-Kun Fiesta 2016! Congratulations to Kent and the rest of the Otaku Asia team — wishing you all the best and hope to see you again at your next event ❤