Otaku Expo Reload 2014 was held last 9th and 10th August 2014 at the Megatrade Halls of the SM Megamall in Manadaluyong City, and played host to international cosplayers Tasha, SSol, and Doremi of South Korea, and Tsubasa and Luffy of Hong Kong, as well as local comic circles, crafters, and J-rock cover bands! 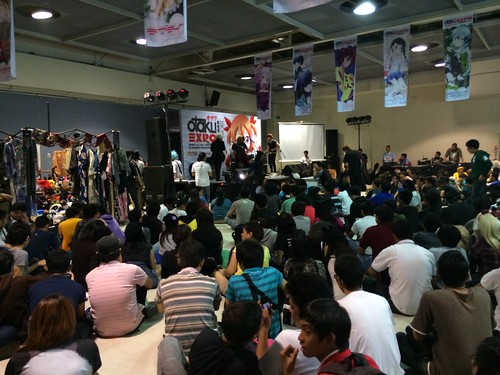 One of the highlights of the event was the press briefing with some of the Guests of Honor, Spiral Cats. With three members in attendance: Tasha, SSol, and Doremi, these accomplished cosplayers shared their thoughts on the joys and demands of professional cosplay, as well as some personal tidbits about themselves.

Tasha, Doremi, and SSol spoke at length about the time and effort it takes to cosplay professionally — as you only don’t have to please yourself as a crafter and a game or anime fan, but also the client whose expectations may be quite high. The SPCats work twice as heard on the prep work (frabric selection, pattern creation, and prototyping), as they do on the costumes themselves (dress construction, embellishing, and prop construction).

And when the pressure of professional cosplay becomes to great? Tasha unwinds by playing videogames at an internet cafe (called a PC bang in South Korea), Doremi likes to cook and bake, while SSol belts her heart out at karaoke.

Currently, the SPCats are still enjoying the challenge of cosplaying professionally for titles such as LOL or DOTA II. However, the group is also looking to the future, with plans to put up a cosplay shop or cosplay cafe when their professional cosplaying careers eventually come to a close.

Personally, we find it refreshing that some individuals are taking cosplay to the next level — not just by refining their skills and elevating their art, but also taking into consideration the more formal aspects of business and talent management, and bringing a measure of professionalism to what is sometimes known as a petty and shallow hobby.

We’d like to thank the organizers and staff of Otaku Expo Reload 2014 for bringing the SP Cats to Manila again and again, and we hope to see more of them in future Otaku Expo events. Til next time!