There’s a galaxy full of stars at the last and biggest Funan Anime Matsuri yet! The week long festival from 6 to 12 June 2016 will feature anisong concerts, celebrity cosplay appearances, and interactive games and experiences for everyone to enjoy!

Luna Haruna gained tremendous popularity as a finalist at the fourth All-Japan Anime Song Grand Prix in 2010. On May 2012, she made her major debut with the song Sorawa Takaku Kazewa Utau (ending theme song for the second
season of animation Fate/Zero), written and composed by Yuki Kajiura.

Her popularity is not only contained within Japan, having been invited to perform at various live events in Asia, Europe and America. She attracts people with her strong vocals as well as her cute look. 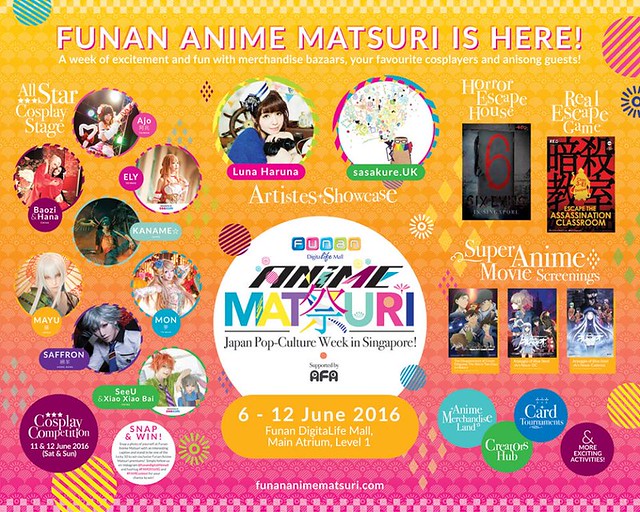 Born in Fukushima, Japan, sasakure.UK grew up heavily influenced by the 8-bit and 16-bit sounds found in electronic games of that time. It was then after he joined the boys choir during his school years that he first encountered the works of many of Japan’s most respected lyricists and poets. He then found himself strongly drawn to songwriting, and through diligent self-study and experimentation, started to create his own musical compositions.

However, sasakure.UK did not limit his output to just sound creation, but also worked in such varied mediums as “dot” animation, photography, calligraphic illustration, package artwork, and video production, garnering an impressive level of respect and attention for his multiple talents.

Additionally, through his skillful and meticulous use of popular vocal synthesis programmes like the Miku Hatsune “Vocaloid” software, he continued to receive even more praise from new fans both old and new to his music, which finally lead to the release of his major label debut album entitled “Do Vocaloids Dream Of Doomsday Bird?”

In a nutshell, he is an artist active in a wide range of areas, truly a product of the social networking generation and a contemporary artist to keep an eye out for.

The singer-songwriter- model-actress, known as Akira, was born on February 15 in Chiba, Japan, and is 168cm tall. Akira rocks the androgynous look with her visual kei and punk style. That was what got her noticed by Kera, a Japanese street fashion magazine that focuses on Gothic, Lolita, Punk, and Visual Kei fashion. She revealed that she was asked to model for Kera after she was featured in a street snap shot, and made her debut in their magazine in 2008. Akira sang “Aoki Tsuki Michite”, the ending theme song for hit anime Black Butler II, also known as Kuroshitsuji II. She has performed in a Vampire Knight musical in Japan as one of the main leads, Kaname Kuran.

Takeru, the vocalist of visual kei band, SuG, wears many hats: He’s a singer, songwriter, director, author, voice actor, model, and designer. Takeru is the brain behind many songs, album, and band concepts for SuG. The singer doesn’t limit his way of expressing himself in just one medium. He designs clothes for his own fashion label, Million $ Orchestra, which he began back in 2010. Million $ Orchestra, a street gothic fashion wear brand, is popular with the Harajuku crowd for it’s unique designs. SuG’s Takeru was born on May 11 and is 164cm tall. They also sang “Gr8 Story”, the ending theme song for popular anime series Katekyo Hitman.

Taiwanese cosplayer Ajo never fails to stun fans with her impressive cosplays of characters with massive and
complicated props. She has been gaining much popularity for cosplaying characters from Kantai Collection: KanColle. Ajo has also participated and won many cosplay competitions in Taiwan.

Baozi and Hana are a well-matched cosplay duo from China. Hana is the adorable make-up wizard of the pair and Baozi is a prop-making fanatic. They are both regular guests and judges for anime conventions and cosplay competitions within China and have been featured in many cosplay magazines.

Ely shot to fame within the cosplay community rise in Taiwan and the East Asian countries with her poignantly beautiful and accurate portrayal of Sakuya from the Touhou series.

Celebrity cosplayer KANAME☆ will greet his fans and visitors alike with his amazing cosplays. From Cloud of Final Fantasy VII Advent Children to Ichigo of Bleach and Portgas D.Ace of One Piece, KANAME☆ continues to wow with the high level of quality and realism in his cosplays. KANAME☆ is currently the cosplay Ambassador for Anime Festival Asia.

The androgynous-looking Mayu has been wowing cosplay fans with her stunning cosplay. Her photoshoots spare no
effort in creating passionate battle scenes and intense expressions.

The adorable Taiwanese cosplayer has charmed both male and female fans with her ability to depict anime characters of both genders with ease. Her sweet nature and beautiful cosplays make her one of the most popular cosplayers in Taiwan and abroad.

Hailing from Hong Kong, Saffron is popular with fans for her handsome cosplays of various male characters. She is dedicated in recreating accurate portrayals of each character.

SeeU is rapidly rising to fame in China and around the world for her cute portrayals of Zootopia’s Judy. Her doll-like features have attracted many fans both male and female. Popular Chinese cosplayer Xiao Xiao Bai started to gain immense popularity in China from 2008, becoming a cosplay judge and guest at various events. He is well-known for cosplays of many Chinese works and has been starring as an actor in Chinese programs as well.

You’re a student from class 3-E, known to be the worst class at Kunugigaoka Junior High School. Everyday, you have lessons and training to improve your assassination skills. One day, your class is attacked by a group of mysterious assassins. Their target seems to be your form teacher, KoroSensei, and they’ve set up traps around your classroom. However, Koro-Sensei, a gourmet in his free time, is enjoying coffee at a boulangerie, leaving you and your classmates of class 3-E behind to face the attack…

If nothing is done, all of you will be killed. You’ve sent a message to Koro-Sensei asking him to return immediately but it seems that all transmission devices have been blocked. There’s no choice but to overcome this crisis based on your own abilities!!! Will you be able to survive and escape this lifethreatening
situation?!

Escape the horrors lurking behind 6 of our rooms within 5 minutes! From OBAKEN, the pioneers for “independent type horror house”. They started their project in 2012 and converted normal houses into horror houses by hand. They become a huge hit on the news and has gained immense popularity since. They are regarded as on of the most talented horror house creators.