The Malaysian state of Penang will be hosting the inaugural Penang Anime Matsuri — Summer Party, PAM2015, a family friendly festival (Matsuri) focusing on Anime, Cosplay, Game (ACG) and Japan pop culture set in the beautiful UNESCO World Heritage Site of George Town on the 23rd and 24th of May. 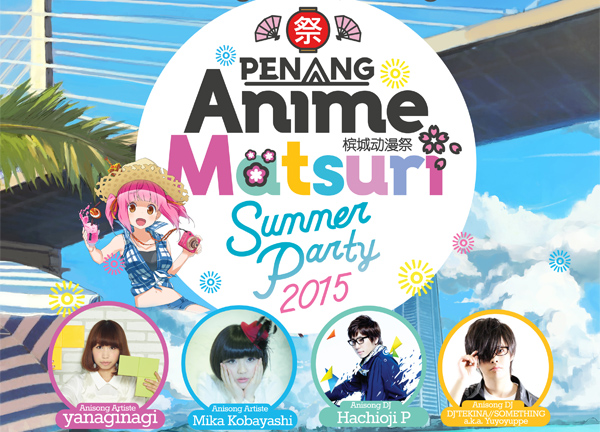 For the first time ever in Penang, witness the colourful world of Anime, Cosplay, JPOP, DJ and more, with Professional Cosplay Celebrities from around the world, listen to top Anime song (Anisong) artistes in concert, and enjoy the music by world renown Anisong DJs.

The event will also feature an indoor exhibition and stage events in the day with the most popular content from Japan, Cosplay showcase and competition! The highlights continue into the night with an outdoor concert stage, a Japanese food street, festival zone and the first Dojin (creators’) Night Market. The fun goes on after the sun sets!

Ticket sale for the concert will start at 3pm on the 14th of March via Peatix, priced at MYR 128 inclusive of 2 days exhibition. Attendees can also purchase tickets on the event day.

PAM2015 is the brainchild of SOZO, the company behind the Anime Festival Asia, and Penang Global Tourism, Penang’s tourism bureau. It will be supported by Anime Festival Asia, the state of Penang and the Consulate-General of Japan in Penang. The Penang Anime Matsuri sets the bar as the event for all to enjoy regardless of age, religion and gender and attracts not only tourist but also fans of Cosplay which has a large fanbase in Malaysia.

magnetic-rose.net is an Official Media Partner of Anime Festival Asia.