The Japan Information and Culture Center of the Embassy of Japan in the Philippines is inviting all J-pop fans to the 2015 J-pop Anime Sing and Dance Contest! Submissions will be accepted at the JICC at the Embassy of Japan in the Philippines, 2627 Roxas Boulevard, Pasay City. The deadline for entries is on 22nd May 2015. The Grand Finals is scheduled for the 25th of July 2015, at SM Cinema Centerstage, SM Mall of Asia, Pasay City. 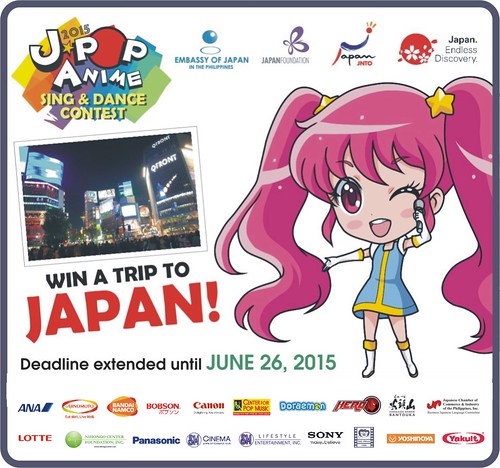 Prospective contestants to the Singing competition may perform solo or form a group not exceeding five members. Contestants may choose any J-pop or anime song, sung in Japanese by a Japanese artist, for their performance. They may choose to perform while playing musical instruments, a cappella, or using the karaoke version of the song (for this option, only original CDs will be allowed).

For the Dance category, prospective contestants must form groups composed of five members. Contestants may choose any J-pop or anime song, sung in Japanese by a Japanese artist, for their performance. They must use an original CD of the song for their performance (the use of pirated CDs and illegally downloaded digital audio is strictly prohibited).

Interested participants must submit a duly accomplished application form, an individual/group photo, a short write-up about the performer/s, a detailed description of the chosen song (ie title, artist, lyrics), and a demo CD containing two audio recordings of Japanese songs by the participant/s for the Singing category, or a video recording of a performance to a Japanese song by participants for the Dance category.

For a complete listing of rules and other details, please visit ph.emb-japan.go.jp.