UP AME — the University of the Philippines Anime Manga Enthusiasts once again played host to anime, manga, and cosplay fans at AME Fair X: The 2014 UP Anime and Manga Enthusiasts Fair. Slated for 13th and 14th of December 2014 at the East Pavilion of the World Trade Center, Roxas Boulevard in Pasay City, it was co-organized by professional event organizers Worldbex Services International. 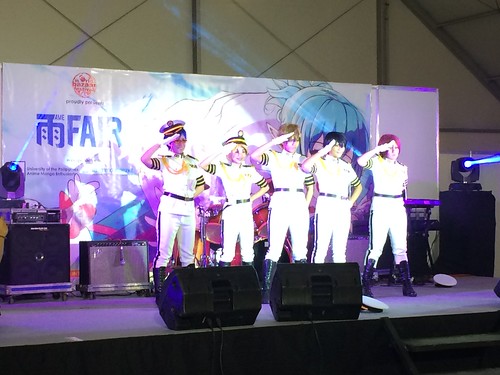 UP AME Fair X featured an exclusive fashion show by international design talent dolldelight, lectures and seminars by cosplay superstars Team Tux, and massive gaming booths from renowned TCG titles such as Pokemon and Cardfight Vangard. There was also a number of partner exhibition booths and hobbyists merch outlests, top level contests and competitions, plus a slew of local Japanese cover bands!

The event was a pretty chill affair — with none of the congestion and chaos usually associated with local anime conventions. And although the event was well-planned and well-executed, attendance suffered due to the erratic weather, as well as competition from a similar event held at the same time in the opposite side of the metro.

Personally, we think that UP AME made the right decision in partnering with a major professional events organization (which can be seen in the well-designed and well-appointed con amenities), however there needs to be better communication between both parties to ensure more successful events in the coming years (like a better-timed event date, perhaps?).

Overall, we have high hopes that the event will continue to evolve and prosper in the near future.

magnetic-rose.net is an official Media Partner of AME Fair X.