UP AME — the University of the Philippines Anime Manga Enthusiasts, is calling on all anime, manga, and cosplay fans to celebrate with them on their 14th anniversary! Come to AME Fair X: The 2014 UP Anime and Manga Enthusiasts Fair, slated for 13th and 14th of December 2014 at the East Pavilion of the World Trade Center, Roxas Boulevard, Pasay City (MAP). Gates open at 10AM. 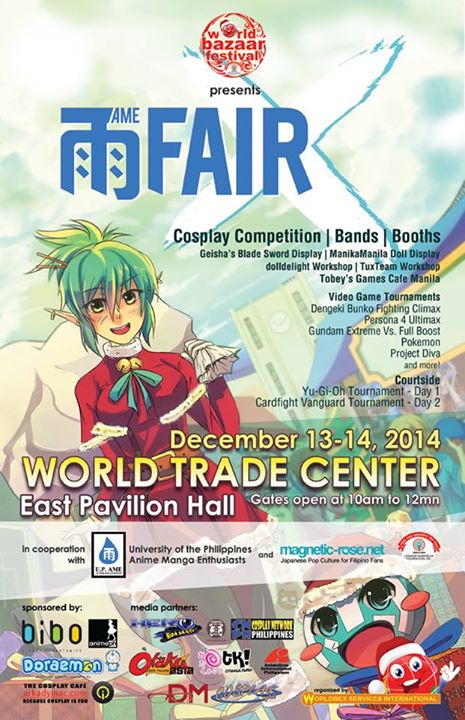 AME Fair X: The 2014 UP Anime and Manga Enthusiasts Fair is brought to you by Worldbex Services International, in cooperation with the University of the Philippines Anime Manga Enthusiasts. Ticket pre-selling details will be released soon so stay tuned to the official UP AME Facebook (facebook.com/UPAME) and Twitter (@up_ame) accounts.

The University of the Philippines Anime and Manga Enthusiasts (UP AME) is an officially recognized and accredited organization in the Diliman campus. UP AME is one of the oldest and most respected organizations of its kind, having been established by several concurrent members of the UP Philippines-Japan Friendship Club (UP Tomo-Kai), and paving the way for other organizations such as UPLB’s SOMA Soshiki and UP Manila’s OMAKE.

magnetic-rose.net is an official Media Partner of AME Fair X.