Cosplay Mania Evolution live up to its promise by organising the first ever JAM: Japanese Anime Music Concert in the Philippines! JAM was headlined by Aya Ikeda — the voice behind the theme songs of popular animes such as Heartcatch Precure!, Kindaichi Case Files and the online games “Finding Neverland Online” and “Harezora Monogatari”, and Loverin Tamburin — the band behind the opening theme for the anime Disgaea and the ending theme for Natsuhiro Drops. 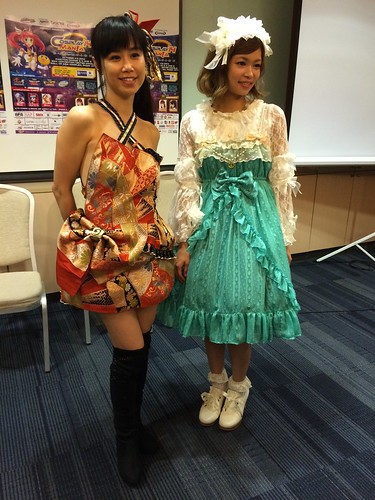 The JAM artists all came together earlier this afternoon the 3rd of October 2014, to speak with the press about their upcoming concert and about their first time in the Philippines. If there is one thing the Japanese and the Filipinos love to talk about, it’s food. Nagao-san from Loverin Tamburin sang praises to San Migue Beer, Aya-san falso from Loverin Tamburin professed her love for sinigang, and Aya Ikeda-san surprisingly said that her favorite Filipino food was the calorific treat lechin kawali!

Another favorite topic is the excitement and delight both Aya Ikeda and the members of Loverin Tamburin felt about performing abroad. Aya in particular was so happy that fans would react well to her performances even if they did not know Japanese. Aya of Loverin Tamburin on the other hand said that she was so happy to see so many people attending their events in exquisite cosplay so she swore that her own costumes would not lose to them design and craftsmanship-wise.

Loverin Tamburin members Aya-san and Nagao-san also talked about their excitement over the upcomingHaneda International Anime Music Festival, to be held in Tokyo, Japan. They are currently working with organizations from all over the world to bring local acts who perform Japanese pop music and anisong to sing live in Japan (Editor’s Note: our sources in Cosplay Mania have confirmed that a Filipino artist will be performing at the event).

If you would like to see these great acts perform live, tickets are still available at SM Ticket Outlets at all SM Cinemas, or online at smtickets.com.